Chief Minister Pema Khandu today called for assistance from the Union Ministry of Social Justice & Empowerment to help the state declare Papum-Pare, the district with the highest population, as disability-free by December 2018.

Speaking at the Samajik Adhikarita Shivir, a free-of-cost distribution of aids and assistive devices camp for people with disabilities here today at the Dorjee Khandu State Convention Center, Khandu said that the state government would like to take up on mission mode to make the entire Arunachal disability-free starting with Papum Pare as a pilot project.

As per the 2011 census Arunachal Pradesh has a total population of 1383727 and according to National Sample Survey 2001 there are 33315 disabled persons, which comprise 3% of its total population, a notch higher than the national average.

Khandu viewed that 3% is a substantial chunk of the population and it is the responsibility of the government to equip and enable this 3% population to contribute in the growth of the state at par with their normal counterparts.

Hailing the camp and the presence of Union Minister for Social Justice & Empowerment Thaawarchand Gehlot with his top officials, Khandu said it was an opportune moment for him and the state government to gain knowledge of the various schemes and welfare projects being implemented by the central government.

Admitting that even the nodal department of the state government – department of Social Justice, Empowerment and Tribal Affairs (SJETA) – will not be fully aware of all the schemes being implemented by the central government for persons with disabilities, Khandu exhorted departmental officials headed by the Commissioner to learn from the experience and set on to work with renewed determination.

He informed that the state government, through SJETA, is implementing the Chief Minister’s Disability Pension scheme – a flagship program of the state government – that offers financial assistance of Rs.1000 per month as economic rehabilitation. During 2017-18 a total amount of Rs 82,08000 was disbursed to 684 beneficiaries across the state.

Further, under the National Social Assistance Programme (NSAP), the state government adds Rs 1700 to Center’s Rs 300 giving a total subsistence of Rs Rs 2000 per month to persons with disabilities in the age group of 60 to 79 years. Likewise, the state adds Rs 1500 to Center’s Rs 500 and pays Rs 2000 per month to beneficiaries above the age of 80.

Referring to the Union Ministry’s assistance to deaf and dumb children to go for Cochlear implant –surgically implanting an electronic medical device that bypasses the damaged hair cells of the inner ear to provide sound signals to the brain – Khandu said the state needs to take full advantage of it. The Ministry offers Rs 6 lakhs per child covering the entire process of implant.

Expressing gratitude to the Union Minister for approving establishment of a Composite Regional Center (CRC) in the state last year, the Chief Minister regretted that the state government couldn’t take the advantage. He directed the SJETA Commissioner to take note of it and immediately acquire a suitable plot of land and follow up with the ministry. He also directed the department to fast-track the process of enrolling and provision of Unique ID for Person with Disabilities (UDID) for implementation of UDID Project and Card generation.

Khandu further requested the Union Ministry to consider opening a manufacturing unit of the Artificial Limbs Manufacturing Corporation Ltd (ALIMCO), a Govt of India undertaking, in Arunachal Pradesh that would cater to the entire North East region. He pointed that ALIMCO, which manufactures aids and assistive devices for persons with disabilities, has only four Auxiliary Production Centres at Bhubaneswar (Orissa), Jabalpur (M.P), Bengaluru (Karnataka), and Chanalon (Punjab) with just one Outreach Centre at Guwahati.

Union Minister for Social Justice & Empowerment, Thaawarchand Gehlot while responding to Khandu’s requests said he will be happy to grant all and asked the state government to submit the proposals to his ministry immediately.

“Submit the proposals and I assure approval within a month,” he announced. 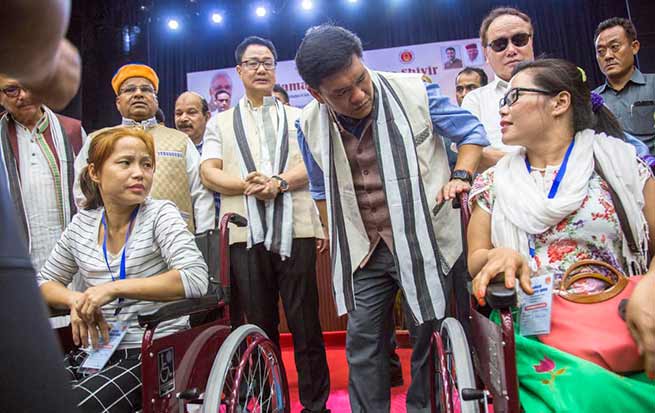 Talking about the Cochlear implant and the assistance provided by his ministry, Gehlot informed that till date 1220 children below the age of six, including one from Arunachal Pradesh, have been provided with the free implant free that costs about Rs 6 lakhs each. He appealed people to write to the ministry with proper address and details if they have or know of any child below 6 who can’t hear and speak and assured the government will immediately provide the assistance.

The Union Minister expressed satisfaction over the camp being held in Arunachal Pradesh wherein 957 persons with disabilities, including senior citizens, have been provided with aids and assistive devices amounting to Rs 67.37 lakhs free of cost. He informed that in the last five years, the ministry has organized 7150 such camps benefitting 11 lakh persons and costing Rs 620 crores.