Capital Police team of Make Bui, SDPO Naharlagun, SI Sushant S Jha and team under the direct supervision of SP Capital M. Harsha Vardhan have apprehended three juveniles in conflict with law in connection with the murder case of Aisha Bano, a 65 years old farm labour which took place in the intervening night of 4th– 5th September 2018 at a remote location near Popu-2 village in the agricultural fields.

The deceased Aisha Bano was killed whereas her husband Ramzan Ali was grievously injured after being attacked by a group of three boys.

Two of the apprehended juveniles in conflict with law were apprehended from various locations in the township area whereas the third juvenile was apprehended today from Lichi village, a border village between Lower Subansiri and Papum Pare. 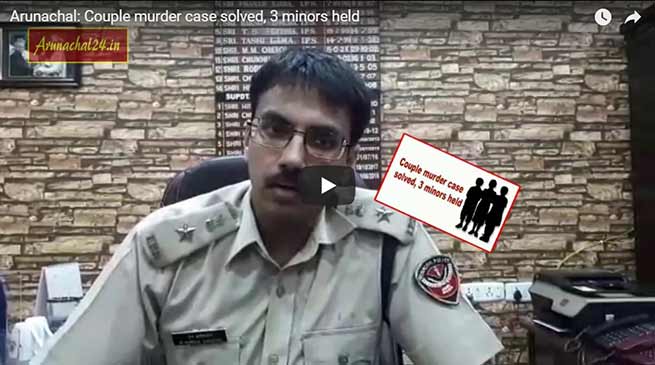 SP Capital said that this case reflects the sincerity and commitment of police towards bringing the culprits to justice. People should have faith in Police and refrain from creating law and order issued just after a crime.

Criminal investigation is a systematic process which requires focus and time. It was a completely blind case with absolutely no clue. Police undertook various measures like meetings even in Lakhimpur district, human intelligence gathering, technical surveillance of suspects, extensive past records checking to gather bits and pieces of information.

It was only through concerted efforts of investigation team of SDPO Make Bui and SI SushantJha that all the bits and pieces were put together to reach the culprit. The process involved following small clues that often led to a dead end.