Addressing the public at the event PM Modi said, “we have brought such a work culture that we lay the foundation of a project and also inaugurate it.” “We do not postpone works,” he added.

Working on vibrant border village scheme under which local youth will be train under NCC: PM Modi

We knew how much importance bamboo has for Arunachal, so we brought a change in the law regarding bamboo cutting. Now people can grow bamboos like other produces: PM Modi

The airport will provide cargo facility which will help the Arunachal farmers to market their produce outside the state: PM Modi

Infra development will boost tourism. Local homestays and products will be benefitted from it: PM Modi 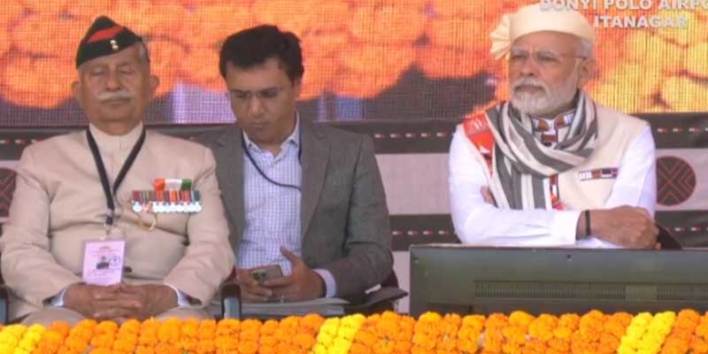 Nothing could have been a better New Year gift thanthe inauguration of #DonyiPolo greenfirld airport ….. says Chief Minister Pema Khandu

Nothing could have been a better New Year gift than the inauguration of #DonyiPolo greenfield airport by Hon'ble PM Shri @narendramodi ji.

Capable of handling 300 passengers during peak hours, the airport is equipped with ultra modern facilities to ensure all weather operations. pic.twitter.com/hOqJDFeqeu

The name of the airport reflects the traditions and rich cultural heritage of Arunachal Pradesh and its age-old indigenous reverence to the Sun (‘Donyi’) and the Moon (‘Polo’).

The airport, which is the first greenfield airport in Arunachal Pradesh, has been developed in an area of over 690 acres, at a cost of more than Rs. 640 crore. With a 2300 m runway, the airport is suitable for all weather day operations.

The airport terminal is a modern building, which promotes energy efficiency, renewable energy and recycling of resources. The development of a new Airport in Itanagar will not only improve connectivity in the region but will also act as a catalyst for the growth of trade and tourism, thus providing a boost to the economic development of the region.

During the Programme, Prime Minister will also dedicate 600 MW Kameng Hydro Power Station to the Nation. Developed at a cost of more than Rs 8450 crore and in an area spread over more than 80 kilometres in West Kameng District of Arunachal Pradesh, the project will make Arunachal Pradesh a power surplus state, also benefiting the National Grid in terms of grid stability and integration.

This project will contribute in a major way towards fulfilment of the country’s commitment to increase adoption of green energy.