PASIGHAT ( By Maksam Tayeng )-  While showing an example to many for community works, the United Friends of 80’s (UFO-80) comprising 50 members of 1980 batch of Government Secondary School, Balek carried out a mass social service of road repairing/ maintenance from Mirmir Charyali to GSS Balek on Sunday.

The mass social service was led by UFO-80’s Chief Coordinator, Mongol Apum who informed that UFO-80s carried out the voluntary work of road repairing of potholes developed on the Mirmir Char-ali to Balek road by putting and leveling concrete cement on all the potholes. The daylong road repairing work by concrete cement was carried out under the technical supervision of Er. Kaling Dai, Asst. Engineer, UD and Er. Karo Rukbo, Asst. Engineer, PWD of Pasighat Division who are also members of UFO-80s.

The team UFO-80s have been carrying such voluntary social services in the area even in the recent past where they have repaired bypass road from Boying to Balek. In today’s daylong road repairing work which started from 6 AM in the morning, around 3 KM stretches of road length were repaired by filling the potholes. 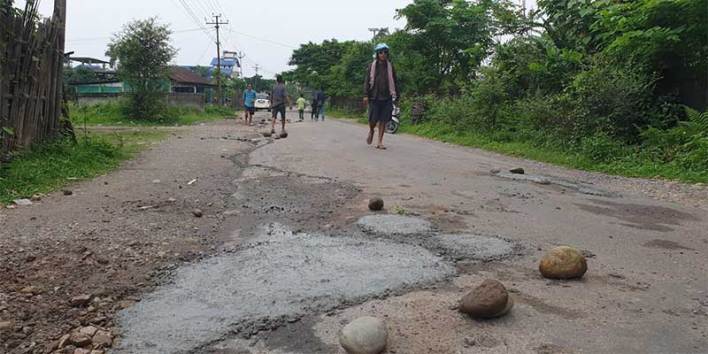 Mongol Apum, Chief Coordinator, UFO-80s expressed his thankfulness to Dy. Commissioner, East Siang District, Supt. of Police for their administrative supports, All Bogong Students’ Union led by Gen. Secretary, Siyang Moyong, President, Oni Dai for their being part of the social service and to fellow members Kaku Moyong and Tanak Tatin who were responsible for today’s social service who led the team with much enthusiasm.

Meanwhile, Oyem Dai, President, Bogong Banggo Kebang of Pasighat area deeply appreciated the voluntary road repairing works of UFO-80s. “Our road was difficult for driving after road condition deteriorated with the development of several potholes along the road. But this team of UFO-80s came up voluntarily without waiting for government help and did the job and they deserves our praises”, added Dai.