The passengers  who faced the difficulties at Naharlagun helipad on Tuesday is the reality of the poor service of Skyone Airlines Helicopter Service in Arunachal Pradesh .

The passengers of the state run Skyone airlines helicopter service from Naharlagun to Guwahati and other locations demanded proper service and facility for the convenient of the passengers who prefer the service mainly  on special case and emergency purposes.

The passengers of Skyone helicopter services on Tuesday have to wait more than 4 hour to take off from Naharlagun helipad to Guwahati at Naharlagun helipad for the reason best know to the helipad management and the officials Skyone airlines.

The Skyone Helicopter VTJJA was supposed to takes off from Naharlagun helipad at around 8.30 morning and passengers were ready with all baggage and boarding passes. But on information by the civil aviation official at Helipad  Techi Tab that the weather is not clear to fly and all have to wait. Again at around 10 AM the same information received and was asked to wait for additional 40 minute but the helicopter did not start and total 22 passenger continue to wait for information of clear weather.

Several passengers began to ask that if the helicopter did not fly let them go for other means and source as many of them have to go to other places, or have to take other connecting flight, few of them have hospital occupation or works at Guwahati, New Delhi and Kolkotta.

But no clear information was passed and passengers continue to wait when the helicopter will began its flight.

Some passengersfeels hungry because they had reached the helipad around 7.30 morning without breakfast to catch the flight.  But they cannot go out from helipad to have food. There was  no food arrangement available at helipad by the concern authority.

Few passengers get down, the  passengers inspite of apologise  by the authority of its delay was forcibly asked to wait in lounge.

The said helicopter could not get repaired within half hour and another helicopter VT SKC was replaced. 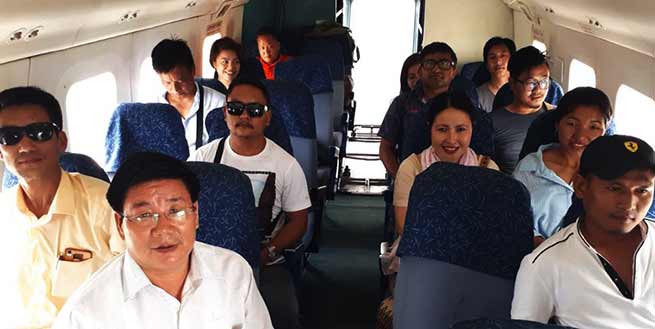 One passenger said that whatsoever it may be but it seems to be internal negligence by the management and authority. Another passenger said that if there is any technical defect the engineers who are already deputed for the purposed should have checked earlier.

Just before taking off the flight if there is a technical defect make us feel unsafe and feel uncomfortable as state have lost several eminent personalities including leaders and officials.

While four passengers who was supposed to take flight for Guwahati at 2 PM have to cancelled their flight and they have to bear more money to take other flight to go to New Delhi.

Passengers who were unhappy with the service of Skyone airlines urge upon the authority to take action as why at last minute of flight the  helicopter developed technical defect and why the helicopter was allow to fly without checking properly.

One Passenger Tadar Akap complain of inactive of the helipad staffs and management is a serious issue. another Techi Ana  said that people prefer helicopter for emergency and government should take care. Dangu Mama said that security personnel deputed at helipad should be in full uniform as like in other airport of the country.

However all 15 passenger in one tune demanded for provision of monitoring the service from the civil aviation department and the government for the safety, security and convenient of the passenger and it should be improve in the lone civil helipad of the state capital. 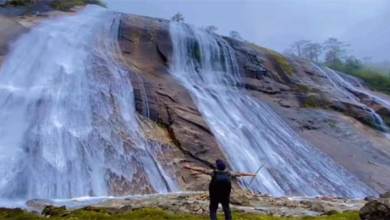