BOMDILA-   The Nation is commemorating ‘Swarnim Vijay Varsh’ of the 1971 Indo-Pak War. One of the four ‘Victory Mashaals’ flagged off by the Prime Minister in Dec 2020 from the National War Memorial, New Delhi is currently at Arunachal Pradesh with Ball of Fire Division of the Indian Army since 12 Sep 21.

The ‘Vijay Mashaal’ moved from Rupa to Bomdi La on 15 Sep 21 and was received with great fanfare. An Army Band provided escort during the reception ceremony and full military honours were accorded to the ‘Vijay Mashaal’. A Mini-Marathon was also organised in which the local populace including teenagers and students participated with great enthusiasm. 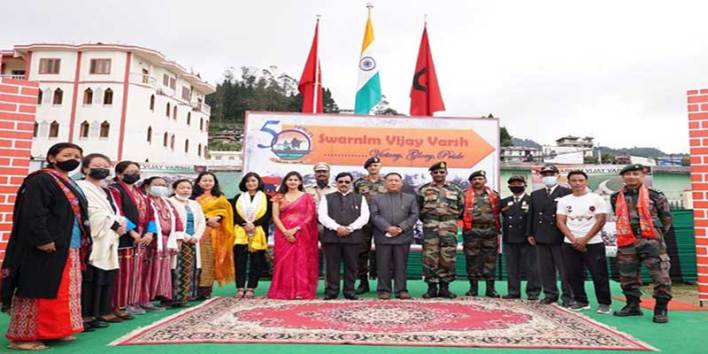 On 16 Sep 21, the Ball of Fire Division organised various commemoration events at Buddha Stadium, Bomdila, as part of Swarnim Vijay Varsh celebration. A scintillating display by Army Band followed by display of Weapons and Equipment by the Army were highlights of the event. Also, a number of cultural performances were presented by the students and local cultural troupes of Bomdila.

During his address, Deputy General Officer Commanding of the 5 Mountain Division, paid respect to the War Veterans and Veer Naris in attendance and remembered the Martyrs of 1971 war. He also reiterated the importance of synergy between the tri-services of the country for fighting and succeeding in future battles. During the events, the Veterans and Veer Naris were felicitated for their valuable contribution in the service of the nation.

The ‘Victory Flame’ shall be moving tomorrow to Dirang for further move along the Line of Actual Control (LAC) with China in the coming days.