Two male Asiatic black bear cubs, one and two months old, were rescued and brought on April 11 to the Centre for Bear Rehabilitation and Conservation (CBRC), jointly established by Wildlife Trust of India (WTI) and the International Fund for Animal Welfare (IFAW), and run 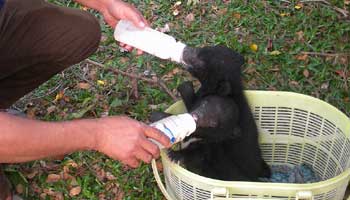 with support from the Arunachal Pradesh Forest Department in Pakke Tiger Reserve.

The two Asiatic Black Bear Cubs were rescued from Abango village in the Roing district of Arunachal Pradesh. They had been picked up by local labourers from the hollow of a tree trunk about a month ago and handed over to their contractor, who had apparently expressed the desire to keep them as pets.

This contractor, coincidentally, was the elder brother of IFAW-WTI animal keeper Chipra Mekola, who had been involved with bear rehabilitation and eastern hoolock gibbon translocation activities undertaken in Mehao Wildlife Sanctuary from 2012 to 2016. On learning that his brother had been keeping the two cubs at home, Mr Mekola informed Sunil Kyarong, Project Head, CBRC, so that the cubs could be rescued, admitted to CBRC for hand-raising, and potentially rehabilitated back to the wild in Pakke in the long-term.

Tasked with retrieving the cubs, CBRC Veterinarian Dr Rinku Gohain accompanied Mr Mekola to his brother’s home with a Mobile Veterinary Service (MVS) team. It took a lot of convincing by Mr Mekola before his brother reluctantly handed them over to the team. Reuniting the cubs with their mother proved impossible since the locals had varying accounts as to her status, some saying that she had been chased away, others indicating that she had been poached a few days ago.

The circumstances around this particular rescue show how a conservation project that involves local community members can bring about a complete transformation in their attitudes towards wildlife, which may traditionally be viewed as a source of conflict or a resource to be exploited. Having previously worked on bear rehabilitation and experienced the joy of hand-raising orphaned bear cubs and seeing them return to the wild, Mr Mekola was able to convince his elder brother that giving up the cubs was the right thing to do.

Appreciating the efforts of the team from CBRC, Kenjum Rina, Divisional Forest Officer, Mehao Wildlife Sanctuary, Roing said, “I am happy to note that the two orphaned bear cubs will now have the opportunity to return to the wild instead of ending up in captivity. It is time for all of us to encourage local communities to come forward and take the lead for afforestation and conservation of wildlife for a better world.”

Fifty-one orphaned bears have been successfully hand-raised and rehabilitated under IFAW-WTI’s Asiatic Black Bear Rehabilitation Project. CBRC was established as part of the project in 2003 with the express aim of rehabilitating displaced bear cubs back to the wild, thereby minimising the number of orphaned cubs ending up in lifetime care in zoos. The Centre is supported by the Ministry of Environment, Forests and Climate Change (MoEFCC) and the Arunachal Pradesh Forest Department.

The two bear cubs rescued yesterday will be inducted into a scientifically developed protocol that targets rehabilitation through assisted release. Over the next few months they will be hand-raised until they are weaned, then taken to a carefully selected release site deep inside Pakke Tiger Reserve. Here, they will be taken for daily walks by an animal keeper who will act as a foster parent, enabling them to explore the wilderness until they are demonstrably capable of living independently in the jungle. Finally, they will be fitted with radio transmitters and released. Post-release monitoring will continue to ensure that they are properly reintegrated into the wild.