PANGIN- Continuing its effort to get back its official name from Yembung to Kebang, the villagers of Kebang on Saturday had installed sign boards at various locations within the village jurisdiction.

Participating in the installation programe, PGWS general secretary Tadung Padung informed that Kebang village is a historically famous village and it was nerve centre during Anglo-Abor Wars but due to modernization the actual name of Kebang has been missing day by day.

“Kebang was once the epicentre of Anglo-Abor Wars. The name of the village is wrongly mentioned as Yembung in all the official correspondences. Whereas, Yembung is name of a river that flow through the heart of Kebang village”, Padung said. 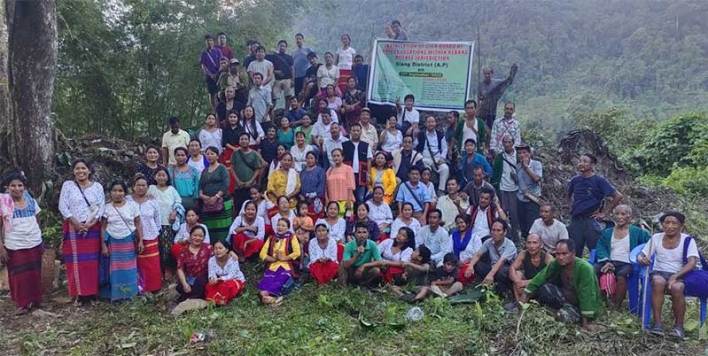 He appealed all the govt departments to write the name of Kebang in all the official correspondences in coming days.

PGHP&RF president Taduram Darang informed that the sign boards installed at various locations will help researchers and tourists to know, study closely, and to explore the historically important ‘Kebang Village’.

Sign Board Installation Committee chairman Lomnong Darang said an attempt has been made through this programme to revive the lost glory of Kebang Village which is considered as epicentre of Anglo-Abor Wars.

Earlier, the panchayat leaders and gaon burahs had written a letter to the district administration to re-write the name of Yembung to Kebang in all official correspondences.