Five members of a  family is left homeless after a fire completely destroyed their home at G Sector.

A massive fire in in G Sector area of the township, which occurred on Monday afternoon, has left at least five persons homeless.

Naharlaugn Fire Station Officer Sujit Chakraborty informed that on receipt of a fire mishap in G Sector at around 21.20 AM.

Three fire tender with fire fighters rushed to the spot and find that the ablaze was too high. But immediately it was contained from spreading  the other area. The  mishap spot was surrounded by other houses . The first priority was to stop the fire from spreading in the area.

It was learnt that the fire first began from the locked OBT premises of Tadar Jaju (owner) an employee of Naharlagun High Court. The owner was out of station along with his family.

As per local sources,  the incident might have happen due short circuit but difficult to confirm at this early stage. Chakraborty said. 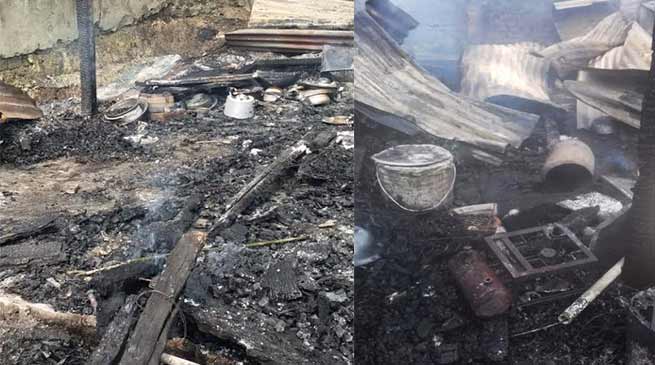 The Type-I government quarter belongs to Tana Yania Yangfo and Solung Yangfo while the rented premises were resided by Sorbananda Das, Poritosh Das and Putin Das.

No loss of life was reported.