ITANAGAR:  Along with the rest of the country the 75th Independence Day was celebrated in Arunachal Pradesh with joy and enthusiasm.  The main celebration was held at IG Park in Itanagar.

While greeting the people, the Chief Minister of Arunachal Pradesh Pema Khandu in his address said, ” This year Arunachal Pradesh has reached an important milestone, i.e., Golden Jubilee year, marking fifty years of the naming of Arunachal Pradesh and getting a distinct political identity as the country celebrates Azadi ka Amrit Mahotsav of India’s Independence. This special moment in our state’s history provides us an opportunity to celebrate our glorious past and plan for the future ahead.

The  Chief Minister said, Arunachal Pradesh today is an ideal example of wholesome development. It is the vision of Sabka Saath, Sabka Vikas, Sabka Vishwas aur Sabka Prayas that the State is witnessing development on all fronts, empowering those on the margins.

From overhauling of infra facilities, health and education system, good governance to the welfare of children, women and farmers, Arunachal Pradesh is writing a new chapter of progress in the promotion of local values, ethos and ethics. Indeed, Arunachal is witnessing it’s resurgent and rising phase. All credit for this goes to Team Arunachal for working tirelessly and aligning with our vision for a HAPPY ARUNACHAL, he added. 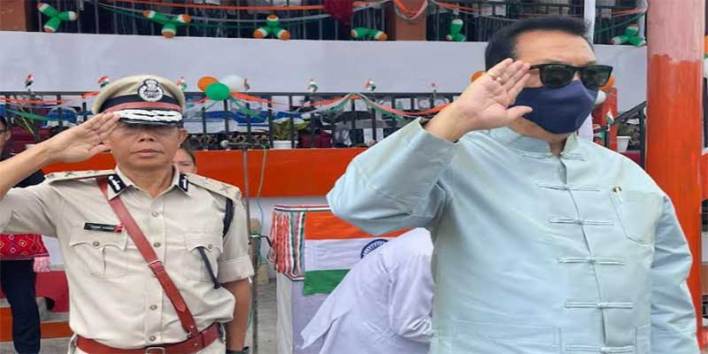 Highlighting various achievements of the Govt, He said that during last 6 (six) years under the dynamic leadership of Chief Minister, Pema Khandu, “Team Arunachal” has tirelessly worked for inclusive & all-round development of our state. He said, “If we look around, we see the rapid changes that are taking place in day-to-day life of a common man and the surroundings he lived in. We believe in “Sabka-Sath, Sabka-Vikash, Sabka-Viswas & Sabka-Prayas”. “While ensuring sustainable development of the state & growth of the economy, we are equally committed for our environment, tradition, culture, values and ethos,” he added.

He further appealed to the people for cooperation and be a partner in the development saying, “As we complete our first year of Amrit Kaal, let us surge ahead with a reinvigorated zeal to realize our shared dream of a peaceful & prosperous Arunachal”. 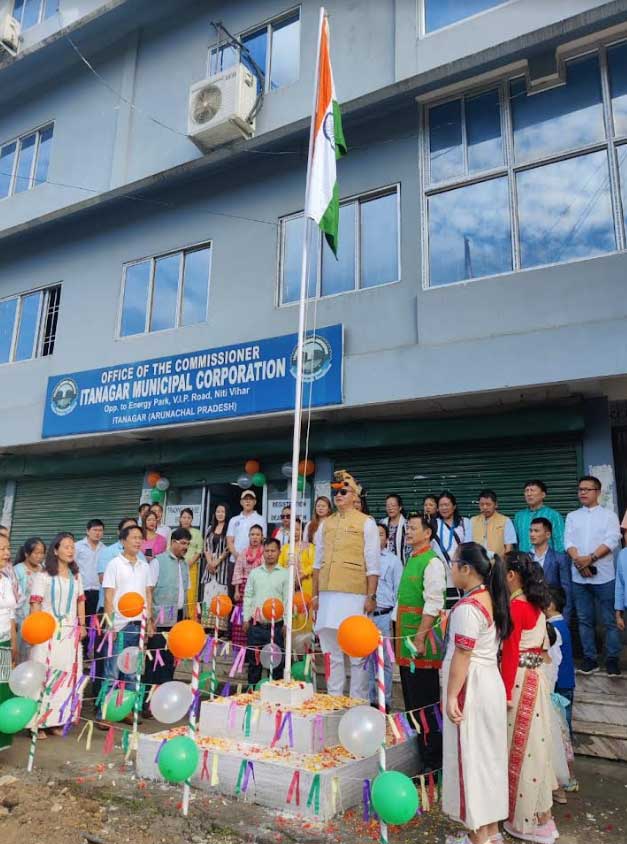 Speaking on the occasion, Mayor briefed the gathering about  the sacrifices made by the various freedom fighters for the nation .He also highlighted various events and schemes initiated by the IMC under ‘Azadi Ka Amrit Mahotsav’  as well as others central schemes.

Phassang, further urged the denizens to join hands with IMC to make the state capital clean, green and crime free capital. IMC is giving and always confer service to the people , but IMC alone cannot do anything unless denizens extend supports, added Mayor. 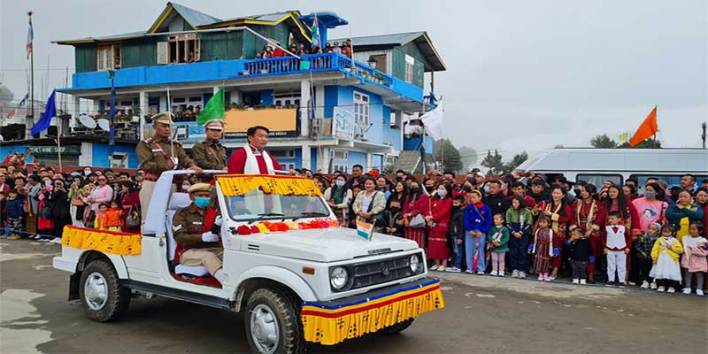 MLA Tawang Tsering Tashi remembered the freedom fighters and all those who contributed for the development of the country. Speaking on development of education sector in Tawang district, he congratulated Principal and faculty members of Dorjee Khandu Govt college,Tawang for giving continous good result since last few . MLA Tawang raised his concern for drug abuse and pollution and appealed the general public to keep Tawang clean.

LONGDING-    76th Independence Day was celebrated at longding with gaiety and jubilance. Minister of RWD and Sc & Technology Honchun Ngandam was the Chief Guest Of the Celebration and he hoisted the National flag at Longding General Ground.

Speaking at the occasion he expressed his happiness on Londing being declared as a tourist circuit and he thanked the Govt of India and Govt of Arunachal for inclusion of Longding in the tourist circuit. He also expressed his graduation for recognition of unsung freedom fighters of Longding District. Then he  spoke in detail about various policies and program of the government of Arunachal Pradesh for the betterment of the people. 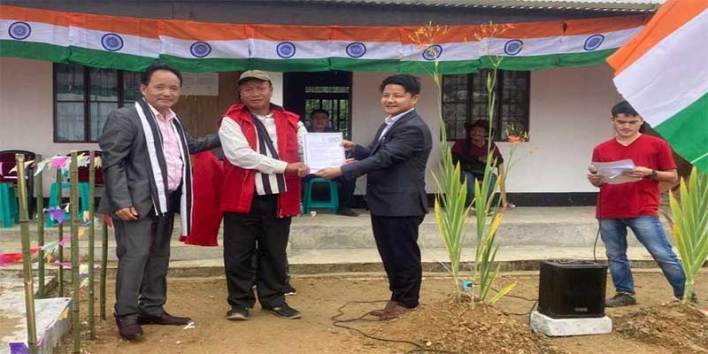 At the outset, the Chief Guest congratulated the people on the historic day celebration. He lauded the tireless efforts and contributions of past local leaders, senior citizens, intellectuals etc in shaping the present day Kra Daadi District.  He also briefed about the various programmes and policies designed by the central and state government for the benefits of the whole community.

Raja suggested the people especially Palin dwellers to lead by example. Now that the district headquarter is coming up at Palin, people from other circles look up to Palinians for inspirations. We must make the district headquarter a model one. And to achieve this all stakeholders must come together and launch a coordinated and holistic approach, he said. 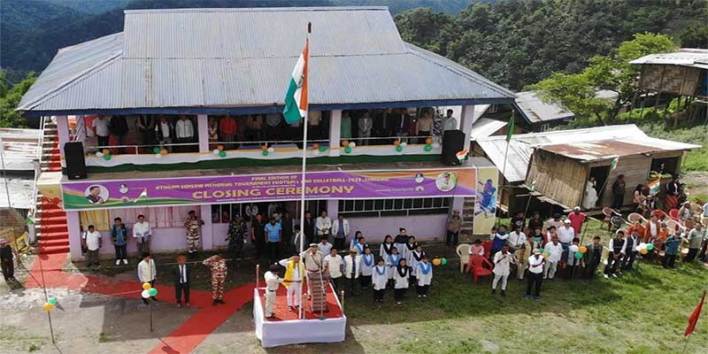 Addressing the gathering, Sidisow extended a greeting for Independence day and recalled the various freedom fighters who laid their lives for the freedom of India.

While highlighting his report cards for the various development activities under 6th-Buragaon-Thrizino Constituency, MLA Kumsi stated ‘ that at least Rs. 71 Crore  has been allotted only to the Thrizino Sub Division for various projects with the support  of Chief Minister Pema Khandu. 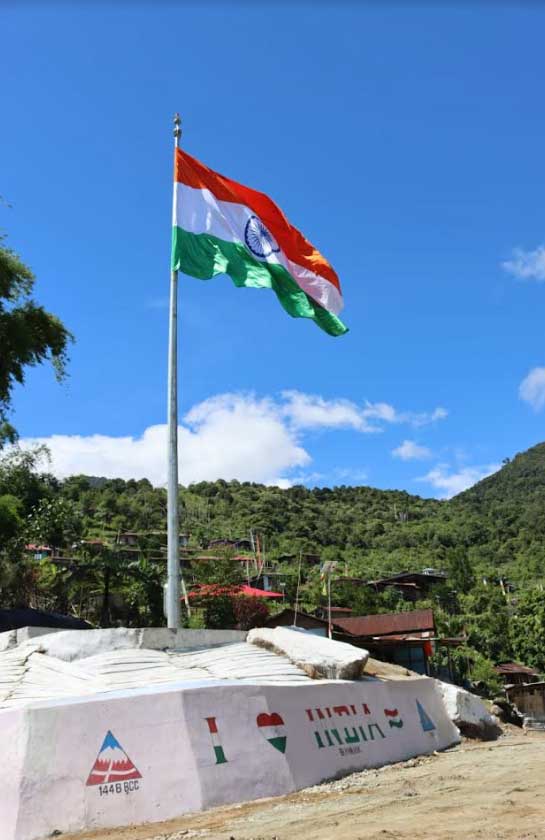 GELLING  ( Last Indian Village at Indo-China Border ) Border Roads Organization’s  Project Brahmank on the occasion of Independence Day has  hoisted a 67 feet tall Tiranga at last Indian Village Gelling and dedicated it to the brave and patriotic people of Arunachal Pradesh.

This is the second highest national flag in Arunachal Pradesh after 104 feet high national flag recently hosted by  Chief Minister Pema Khandu in Tawang. However, in terms of distance from LAC, this is the highest Tiranga so close to LAC.

Standing tall the National flag at Gelling the last Indian village gives a clear message of a new, strong and self-reliant India.

Border Roads Organisation besides constructing huge network of roads in remote border areas of the country, is also playing a leading role towards national integration and spreading nationalism in the larger population on the country through such noble efforts, a BRO official said. 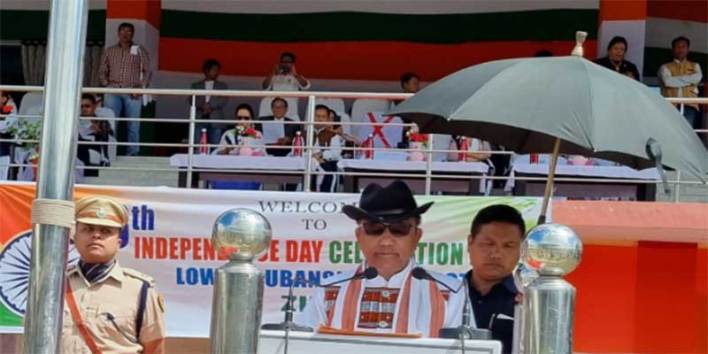 ZIRO:   Addressing the gathering during the Independence Day celebration here at Padi Yubee Outdoor Stadium, Taki informed that every village in Ziro now boasts of a Govt. school, electricity and piped drinking water, all-weather roads, mobile and internet networks and robust health care facilities due to the hard efforts put in by citizens and former leaders.

Terming that Ziro was slowly and steadily transforming into an educational hub and a popular tourist destination place, Agri, Horti, AHV, DD & Fishery Minister and local Legislator Er.Tage Taki appealed the denizens to resist the temptation of division along narrow sectarian lines and remain united for the sake of development and prosperity of Ziro. 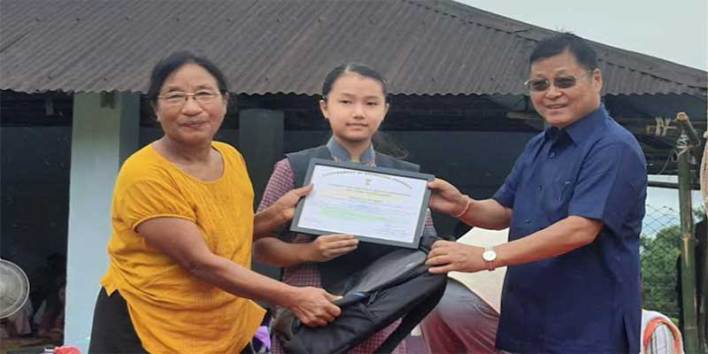 PASIGHAT –  Along with the rest of the country, the 39th Mebo Assembly Constituency under Mebo Sub-Division led by Mebo MLA, Lombo Tayeng also celebrated the 76th Independence Day of India with great fervor & gaiety amidst the presence of ADC Mebo, other HoDs, and admin officers, public leaders, students from various schools etc.

In his speech, Tayeng said, “on this auspicious and historic day of the Seventy-sixth Independence Day celebration of our Country, from the ceremonial flag hosting ground of the Mebo Sub-Divisional headquarters, I would like to seek an opportunity to convey my heartfelt greetings and good wishes to each and every person present here and the people of the Subdivision as well. 15th August 1947 was the appointed day of the destiny of our Countrymen. And once again we stand forth after long slumbers of struggle, awake, free, and independent. This is the day when our Countrymen got liberated from the yoke of the colonial rule of Britis. It is our holy duty to remember and commemorate the great souls, martyrs and heroes who laid down their lives on the altar of our holy motherland. In this regard, would like to offer my floral tribute to Mahatma Gandhi, Pt. Nehru, Sardar Patel, Netaji Subash Chandra Bose, Bhagat Singh, Lahiri, Asfaq,. Mangal Pandy, Bal Gangadhar Tilak, Gokhle and many more known and unknown freedom fighters; I salute and pay my homage”. 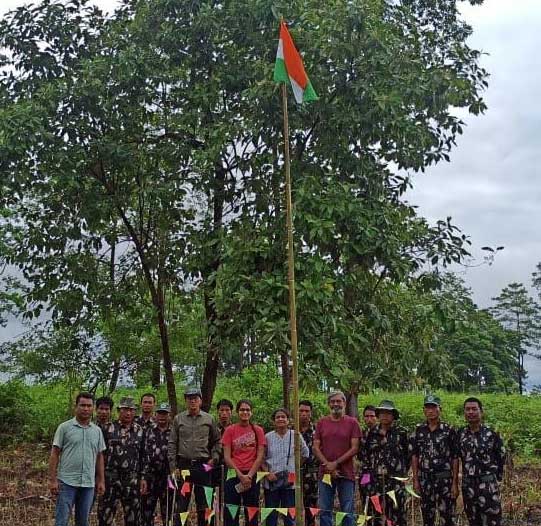 PASIGHAT-  Along with the rest of the country, the wildlife staffers of D. Ering Wildlife Sanctuary here in Arunachal Pradesh also celebrated 76th Independence Day on 15th August by unfurling the National Flag and singing the National Anthem amidst the wild and silence of nature.

In the sanctuary’s Borguli Wildlife Range, the tricolor was hoisted by Dr. Kaling Dai, a retired Jt. Director, Health Services, Govt. of Arunachal Pradesh who happens to be a wildlife lover and a wildlifer who hails from nearby Berung village, a fringe village of D. Ering Wildlife Sanctuary. The I-Day programme of Borguli Wildlife Range was also attended by Dr. Amit Sahai and Smti Alka Bhargava, both retired PCCF & HoFF, Government of Assam who had come to visit the sanctuary along with their daughter. A plantation progrmame was also held within the premises of the Borguli WL Range wherein several tree saplings were planted marking the day.