Today, I concluded week-long tour to the North Eastern Region of India. I am back at my residence in Delhi but my mind is still immersed in memories of the lush green hills of the North East, dew drenched meadows, colourful birds, pristine lakes, warmth and hospitality of the people… their folk songs and music are still ringing in my ears filling my heart with bliss and joy. Seven sisters are indeed incredible!

This seven-day journey has enriched my experience and understanding of North Eastern States as I got to see everything from a fresh perspective. It was a memorable trip that I will cherish forever.

North-Eastern India is blessed with a rich variety of bio-resources. Fertile soil, high rainfall and abundant sunlight have turned the region into an important biodiversity hotspot with a large number of endemic species of flora and fauna. My visits to the Institute of Bioresources and Sustainable Development in Imphal and ICAR National Research Center on Mithun in Dimapur reaffirmed my belief that sustainable development and management of its rich bio-resources holds the key for the socio-economic growth of the region. I was quite impressed by the work being done by our scientists at these institutions and further advised them to come out with innovative research to protect and conserve the rich bio-resources and livestock of North Eastern India. To their credit, the North-Eastern states have taken the lead in organic farming— the rest of India can learn valuable lessons from them. 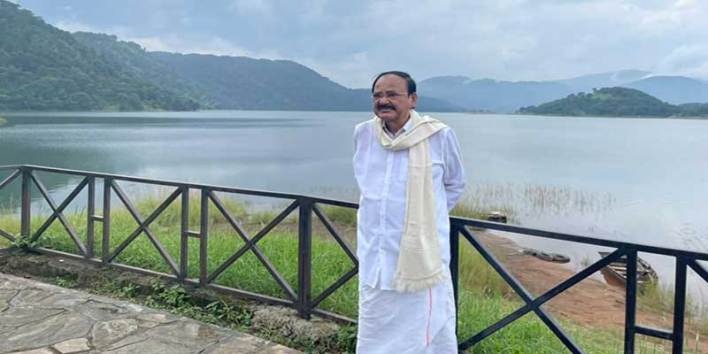 North-Eastern India with its hilly terrain crisscrossed by innumerable rivers and streams, faces challenges in road connectivity. That is probably the single biggest hurdle in the region’s development. However, a sustained push by the Centre and States has led to vast improvement of the situation. On more than one occasion, during this tour, my helicopter could not take off due to inclement weather leading to apprehensions of cancellations of some programs. I was not in favour of cancelling events as people had been making preparations for many days and had been waiting for the day of my arrival; it would have been a big let-down for them, as it indeed would have been for me… and so we continued — travelling by road from Guwahati to Shillong and back to Guwahati from Shillong.

I must admit without any hesitation that these long journeys are some of the most enjoyable road rides in my life which will stay forever in my memory. On one such journey, I made a brief halt at picturesque Umiam Lake near Shillong and was mesmerized by its beauty. 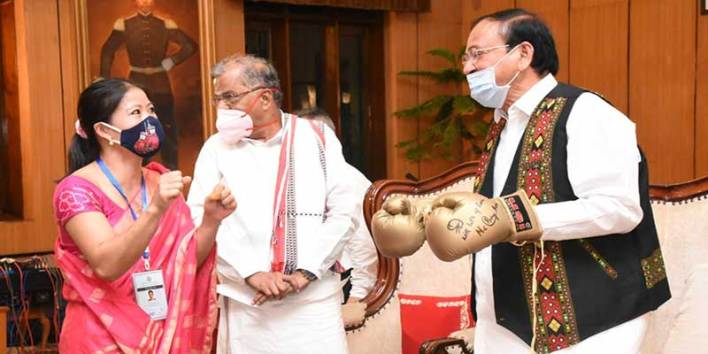 In Shillong, I laid the foundation of the improvement/widening project of the Shillong-Dawki section of the NH-40 and attended a workshop on “Changing Role of North-Eastern Council in the Development of North-Eastern Region”. There, I articulated my conviction—“If the North-East region progresses, India progresses…If the region lags behind, India lags behind” and not surprisingly, it found resonance with the scholars, analysts and experts present. I also advised the North Eastern States to share best practices in various fields and derive mutual benefit. India should work as Team India- Centre, States and Local bodies working together on developmental issues to find solutions.

Availability of good and affordable healthcare is an important indicator of human development in a state. During my trip, I am happy to have inaugurated the PET-MRI wing at the State Cancer Institute in Guwahati. What made me happier was that it is only the 4th such MRI machine in India and the first in the country, which is based on Time-of-Flight technology. I was also impressed by Assam’s Distributed Cancer Care Model and would highly recommend other Indian states to emulate it.

The North-Eastern Region is renowned for its rich arts and craft forms preserved and promoted by communities since time immemorial. Inaugurating an exhibition of handloom and handicraft products in Agartala, Tripura, I interacted with artisans and weavers and was touched to see their emotional attachment to their traditional crafts despite difficulties in marketing their products. Artisans from all North-Eastern states displayed their products at the exhibition, which was organized by the North-Eastern Council. I was very impressed by the handloom and bamboo handicraft there.Equally impressive was Assam’s art and handicraft exhibition on the banks of Brahmaputra at Mahabahu Brahmaputra River Heritage Center that I inaugurated in Guwahati. It is really important to preserve and protect the traditions, customs and heritage of various communities in the region. 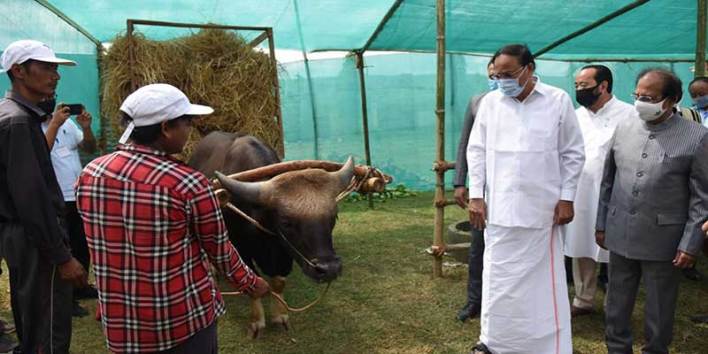 I urge the people, particularly youngsters, to go ‘vocal for local’ and buy Indian handicrafts, handlooms, Khadi and other products made by our artisans instead of foreign items.

A constant engagement during my entire tour to the North-East was my interaction with achievers from various fields in every State. Almost on a daily basis, I took time off to meet people who have made a mark in the fields of sports, science, education, literature, arts, music and business. These meetings left me filled with enthusiasm and joy. On one such occasion in Manipur, I was happy to receive boxing gloves from the legendary boxer Mary Kom. My tour of the North-Eastern Region is filled with a host of such precious memories.

In a similar manner, every evening of mine over the last seven days was well spent in the company of local cultural figures and folk artists. The rich variety of dance forms, songs and musical instruments that each of the North-Eastern States offers, leaves one enthralled. Be it ‘Bihu Adoroni’ on the bank of river Brahmaputra or traditional Lotha song that is sung after harvesting of paddy fields or Apatani folk dance, “Pakhuitu” depicting the behaviour of birds and forest animals, every single evening was made memorable by the lively performances by zestful folk artists. I would urge the people from other parts of the country to visit the North-East to appreciate the natural beauty and cultural richness of the region.

But it is disappointing to note that despite being such a wonderful place, the general attitude toward the North Eastern Region to this day is largely characterised by ignorance, lack of appreciation and stereotyping in the rest of India. This must change.

I also had the honour of addressing a Special Session of the Arunachal Pradesh Legislative Assembly where I complimented the State Government and other stakeholders for the progress of the State. I was truly impressed by the architecture and the seating arrangement of the Assembly. It is one of the best constructed Assemblies in the country. In fact, there are quite a number of good practices being implemented in the Norfth-Eastern States, which could be emulated by other states in the country. For example, the paperless e-Vidhan system introduced in the Assembly making it the first Assembly in North-Eastern region to implement such a initiative is truly laudable. Similarly, the devolution of funds and powers to functionaries of the local bodies as per the provisions of the Constitution is also commendable. I had also inaugurated Arunachal Pradesh Assembly’s library, a paper recycling unit and Dorjee Khandu auditorium in the Assembly.

After my seven-day trip, I have returned assured that the North-Eastern Region is witnessing a new era of resurgence. I have a better understanding of the men, matters, aspirations, challenges and opportunities of the region. A welcome development is the decline in insurgency in the region. I am confident that the North-Eastern region would become totally free of insurgency in the near future in view of the various developmental initiatives and the strong desire of the people for peace and progress. The fact is that seven of the eight States of the region performed better than the country’s Human Development Index (HDI) in 2019. But how many of us are aware of this?

Not many outside the region would know that the National Crime Records Bureau (NCRB) report finds Nagaland as the safest state for women in India. Assam is world renowned for its tea and silk. Manipur, a state with just 0.24 percent of the country’s population produces a good number of international sportspersons. True to its name, this ‘land of gems’ has given us rare gems like Mary Kom and Mirabai Chanu who have done India proud.

Although, I wanted to cover all the States in the region, I decided against visiting Mizoram to enable the State administration to focus more on dealing with an upsurge in COVID-19 cases. Later this month, I will undertake a three-day visit to Sikkim& Darjeeling from October 20th.

We have a lot to learn from the rich North-Eastern States. Some time back, I saw a video of a road in Aizawl, Mizoram and was amazed to see motorists observing strict traffic discipline even though no traffic cop is in sight. This is a rare sight in other big Indian cities.

I would urge the media to focus on bringing out these positive stories from North-Eastern States to the rest of the nation. In the past, media coverage of the region largely remained limited to reporting insurgency related incidents. But winds of change are blowing across the North East now. There are a vast number of things and inspiring stories waiting to be explored… and told. The recent coverage of Olympians from the North-East in the national media has been positive and extensive. We need more of this.

Another important point I would like to stress is the need to include inspiring and positive stories from the North-East in our school curriculum. Today, our textbooks teach us only a few facts about this region, such as the location of India’s first oil refinery at Digboi, Cherrapunji being the wettest place and Brahmaputra as the longest river. Very little is taught about the glorious history and rich cultural heritage of these states.  In addition to correcting this imbalance in curriculum, more student visits should be organised to the region and more student exchange programs should be conducted with North-Eastern States. Today, technology has bridged physical distances; I would urge students from across India to make at least one friend from the North-East and learn about their rich linguistic and cultural heritage. This is the way forward to strengthen the unity of the nation. 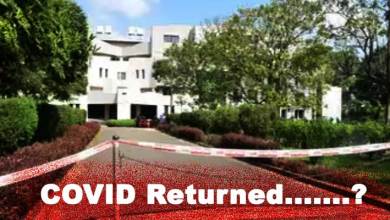