In a break through the Tawang police today apprehended and arrested 7 more persons in connection with the missing and death of Class-XII student Toko Yame who got missing after a group clash by students in Tawang on September 16 last while body was recovered after 8 days.

2 persons have already been apprehended and are custody and further investigation is being carried out by the District Police.

In a press release Tawang District Superintendent of Police, Manoj Kumar Meena said that the missing boy Late Toko Yame was found at around 1600 hours on September 24. The body was in semi-decomposed state. The body was earlier shifted to District Hospital, Tawang and subsequently sent to Tomo Riba Institute of Health & Medical Science (TRIHMS), Naharlagun so that Post-Mortem examination can be carried out by forensic expert and specialized board of doctors to ascertain the cause of death.

On the other hand EKSWCO (East Kameng Social Welfare and Cultural Organisation)  and AEKDSU (All East Kameng District Students Union)  jointly submitting three point  memorandum regarding the murder case of one Toko Yame and demanded  immediate arrest of the culprits  involve in the death of Toko Yame . 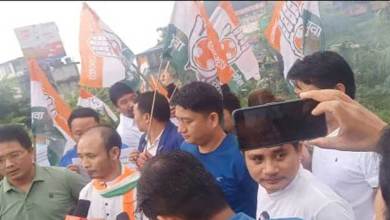