GUWAHATI: The Government of India has proposed a 15.6km twin-tunnel under the mighty Brahmaputra river which will help reduce the travel time between Assam and Arunachal Pradesh.

In a report published on a national daily, each of the two tunnels will have two lanes for smooth flow of traffic and will be built 22 metres below the river bed. The total length of the project will be approximately 33 km, including the 15.6 km tunnel and 18 km approach roads to connect to the highway.

The project has been endorsed by the Directorate of Military Organisations and will be completed within two years as soon as work on the proposed project begins.

The much-talked-about twin-tunnel project is expected to cost around Rs 12,807 crore. It is a  greenfield alignment to provide a direct link between Gohpur on NH-52 and Numaligarh on NH-37 in Assam. 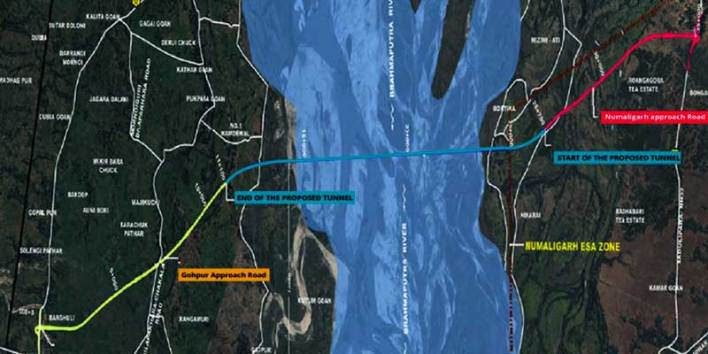 The link is a part of the 315 km long NH-37 that connects Nagaon to Dibrugarh. It will help bypass the Kaziranga belt that falls on this highway stretch.

The project will be funded entirely by the Ministry of Road Transport and Highways, stated the report from the national daily.

At a meeting on September 1 chaired by Road Secretary Giridhar Armane, NHIDCL was directed to prepare a draft note for the Cabinet Committee on Security after getting the project endorsed by the Ministry of Defence.

If the decks are cleared for the project, then this will be the second twin tunnel in India after Delhi’s “Riddhi and Siddhi” at Dabri Mor Station.