The FIR said that OC Bomdila PS Ashok Tayeng have showed total vindictive behaviour on knowing that the two army personnel  Ching Sonam and John Samyor belongs  2nd Arunachal Scouts, they were forcefully taken them into custody, the information of their detention were not informed to the nearest army establishment or station headquarter and termed it as procedural lapse. The two shoulders were beaten up behind the bars with canes and sticks and got seriously injured, OC Ashok Tayeng was in intoxication while on duty during the Budha Mahotsova on November 2.

Misbehaviour and unruly attitude and uttered unparliamentarily words when he went to meet him at Police Station. 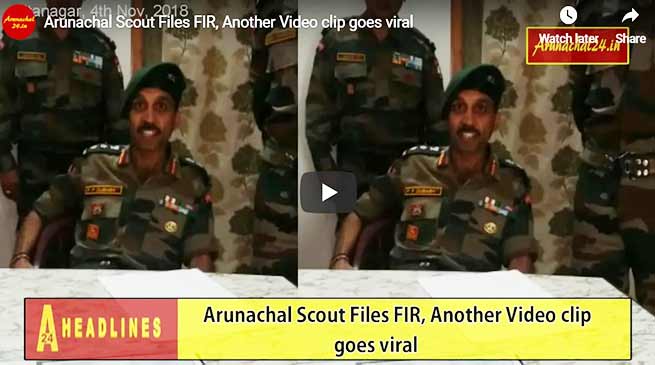 Unnecessary provocation the QRT of 2nd Arunachal Scout when he went to meet SP at PS at around 1 PM on November 3 and reportedly that few round were also fired by the  police, thereby further agitating the troops, and demanding strict action against the OC Ashok Tayeng and should be relieved of his duty as an interim measures. the FIR said.

A copy of the Report submitted by CO, 2nd Arunachal Scout today to its higher authority ie, Brigadier (A) Headquarter of 4 Corps, Tezpur elaborated the chronology of the incident.

However West Kameng SP Raja Bhantia when contacted  inform that a FIR have and found that there is no cogniabel offence evensong a committed have been constituted under the rank of Additional SP and report will be submitted within a week.

He however said that the two personnel of 2nd Arunachal Scout may be witnessing the Buddha Mahotsova but they were not in uniform even not having Identity card and under influence of alcohol and creating disturbance and misbehaving with lady and to take action that duo were brought to Police Station. But the mayhem created by the officers of the 2nd AS was also uncalled for with a huge contingent of personnel and vandalising the PS as well as other public property and manhandling the police personnel and public is unexpected. He said.

The report will be submitted within a week to his office as well as Police Headquarter, Itanagar and action will be taken thereof. SP added.

Meanwhile the situation is tense but under control,  and total five ( 5 nos ) of  FIRs have been registered in Bomdila police station.