NAMSAI-   In a joint operation of A/186 Bn CRPF and Namsai police,  A self-styled area commander of the NSCN (U), identified as Mineshwar Dihingia aka @Pilot (37), was apprehended from his hideout in Kaupatoni village in Mahadevpur of Namsai district on Tuesday.

The arrested accused person Mineshwar Dihingia @ Pilot is the area commander of NSCN(U) of Namsai district and was involved in as many as 5 (five) different cases registered with Namsai PS, Mahadevpur PS and Crime branch.

According to police sources, Dihingia was involved in various extortion cases in Namsai district for the last 6-7 months and had placed extortion demand to some prominent businessmen and extorted money from a local petrol pump in Namsai District.

After getting  information from the reliable sources, Since 28th September 2021, 5 (five) Police Nakas were placed in various locations under Lekang circle by the district Police in collaboration with 186th Bn CRPF, Alpha Company, Mahadevpur.

Further Police personnel in plain clothes were also engaged for locating the exact location of the accused person. Technical intelligence support from the Police headquarters was also provided to the District Police. 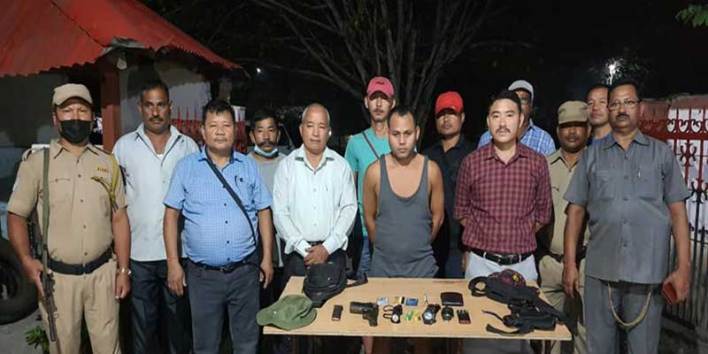 At last,  On 26/10/2021, the location of the wanted accused was traced in the Kaupatoni village, and accordingly the area was cordoned off and rigorous search operation was carried out and finally the accused was arrested.

The team after arrest of the wanted accused Mineshwar Dihingia @ Pilot, recovered .38 Pistol with Magazine , 5 nos of Live rounds, one Pistol Holster , Mobile handset, two number of  ATM card, Torch Light and others items from his possession.

186th Bn CRPF, Alpha Company, Mahadevpur under the command of Assistant Commandant Hari Shanakar also assisted the Namsai Police in cordoning the suspected hideout of the wanted accused for the last 30 days in Mahadevpur area. 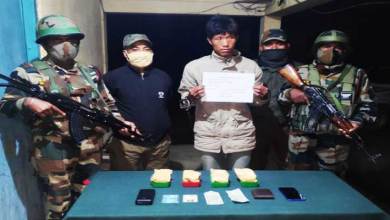