ITANAGAR:  Along with the rest of the country the 75th Independence Day was celebrated in Arunachal Pradesh with joy and enthusiasm by following all SOPs and social distancing because of COVID-19.

While greeting the people, the Chief Minister of Arunachal Pradesh Pema Khandu in his address said, “75 years ago, on this auspicious day, we the citizens of this great nation had pledged to build an India of the dream of our forefathers. After 75 years, we can say with pride that we have come a long way, making significant achievements in every field. Under the leadership of our visionary Prime Minister Narendra Modi ji, the country has witnessed an unprecedented development during last few years.

Our journey as a nation has been exemplary. From a food deficit country to not only self-sufficient to feed 1.3 billion population but emerging as a major exporter of agriculture products is a big development. At the outset, I take this opportunity to thank our hardworking farming community to make it possible” . WAKRO-   Addressing the 75TH Independence day celebration at Wakro, Dy Chief minister Chowna Mein  said that ”  On this day in 1947, we attained freedom. Today we are the largest democratic & a fast growing nation in the world. The transformation was possible due to the sacrifice & immense contribution of our leaders, social workers, farmers, scientist, teachers and known &unknown heroes in their respective fields. Our own, Late TassasoYunji was a great soul and a silent social worker. His contribution in the society will be remembered by all of us. On this auspicious occasion, I on behalf of the people pay a glowing tribute & homage to this great social worker who untimely left us for heavenly abode due to the Covid-19.  Today we are celebrating our independence day under the shadow of a global pandemic. The Covid-19 has hit everyone very hard. The speed of infection and the death toll in 2020 had shaken the world and virtually the entire globe went to lockdown. There was a fight between “lives & livelihood”. We have resolved to fight this enemy with the greatest resilience and choose “ Jan bhi Jahan bhi” principle. TAWANG-  Tsering Tashim,  MLA Tawang unfurled the national flag at General parade ground in Tawang . He Remembered the sacrifices made by freedom fighters  all the former leaders and social activists who contributed for the development of state in particular and nation in general. MLA Tawang conveyed his gratitude to Chief Minister Khandu for taking state to new heights of development inspite of covid pandemic. Tsetan Chombey, President NGO YUVA Arunachal was presented with chief of Army staff commendation card and badge in recognition of his immense contribution towards augmenting the perception management, his NGO has created enhanced synergy in civil military relations in the strategically sensitive district Tawang.He is the only civilian from North Eastern states and among the only 14 civilians to receive this commendation for the year 2020-21.The commendation card and badge was handed over to him by commander Tawang brigade. DOIMUKH-  12 National Disaster Response Force (NDRF), Itanagar, Arunachal Pradesh observed Independence Day on the occasion of 75th years of India’s Independence in commemoration of “Azadi ka Amrut Mahotsav” at BN HQ Doimukh and its field location.  Rajesh Thakur, Commandant, 12 NDRF hoisted the flag and addressed short speech regarding the contribution of Indian freedom fighters and martyrs who had sacrificed their life to get India’s freedom. He also thanked all the officers and Bn personnel of the 12 NDRF for their commitments in responding emergency disaster outcomes. 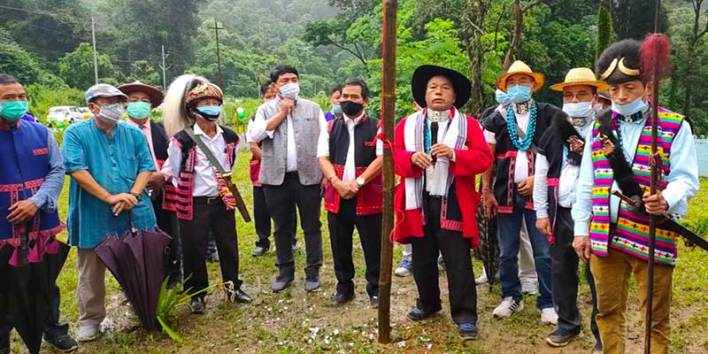 PALIN-   Along with rest of the country, the 75th Independence Day was also celebrated here. Tali MLA  Jikke Tako was the Chief Guest of today’s celebration.   In his speech,  he said that it was his privilege to be the first MLA from Tali Assembly Constituency to unfurl the national flag here at Palin, which is now the district headquarter. Tako highlighted the achievements of the Pema Khandu led state government. He said, “the developmental activities of this government is very visible. The state is moving towards the right direction under the able stewardship of Pema Khandu.”

BANA-   Remembering the great freedom fighters who sacrificed their lives for the Indian Independence on the 75th Independence Day celebration, Minister for Environment & Forest Mama Natung today called on the people of his constituency to be ‘Aatma Nirbhar’. Addressing the gathering of people at Bana general ground here on Sunday, Natung said that to develop the district, the people of East Kameng should be self- reliant from the very village level, and to do so, people should cooperate and support each other. He said, to encourage the self- help group and other organization in achieving Aatma Nirbhar, he assured to invest his MLA-LAD funds in such activities. The people of our district have the potential to excel in the field of handicrafts, agriculture and horticulture etc.