KAHO- The Department of Information and Public Relations (DIPR) in collaboration with local district administration of Anjaw and villagers of Kaho conducted a day-long Azadi Ka Amrit Mahotsav (AKAM) programme at Kaho, the first village of India to commemorate 75th year of India’s Independence.

While addressing the gathering, Denhang Bosai, Deputy Director, threw light on the significance of AKAM and told the villagers that both the GOI and the state government are paying much attention to people living in the border areas and steps are being initiated to improve the infrastructure of road connectivity in the remote areas to mitigate the problems being faced by the villagers.

He said that the AKAM programme was being held Kaho village to show-case Kaho as the first village of India and also to bring into public domain the significance of Kaho village in the context of India and China.

Onyok Pertin, Deputy Director, in his address, told the villagers that they (villagers) were the sentinels of the country along with the security forces guarding the borders. He said that more such programmes will be held in future also to build a strong bridge between the government and the people in border areas. 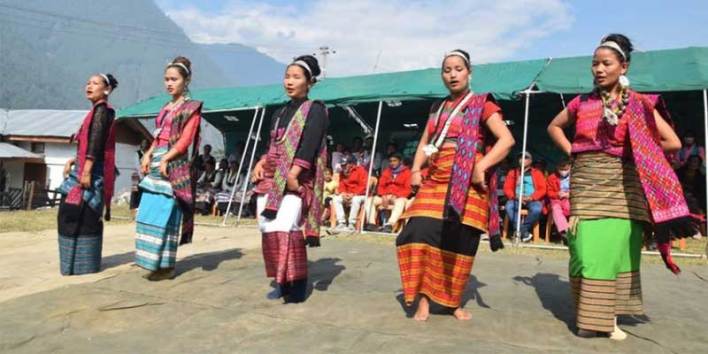 The Circle Officer of Kibithu (Kibithoo) and Walong Ms Taba Milka while appreciating DIPR for organizing the AKAM programme at Kaho, thanked the villagers for their active support and cooperation to DIPR and district administration. She said that such a programme will enthuse the villagers and encourage them to work hard in conjunction with the state government agencies.

The GB of Khrowti and Bara Kundan, Unchen Meyor and Spokesperson of Meyor Welfare Society, TT Meyor while participating in the deliberations, appealed DIPR to impress upon the state government to address the plethora of problems being faced by the people in the China border and assured their full cooperation and unflinching faith in the leadership of Chief Minister Pema Khandu.

Patriotic films were also screened as a part of the programme. Meyor folkdance and Miju Mishmi modern dance performances enthralled the gathering.

Situated 40 KM away from Walong, Kaho village, nestled in a scenic, serene and enchanting valley amidst pine-clad lofty mountains and idyllic and enchanting ambience, is the first village of India. China is only 10 KM from Kaho village. Kaho means Kuhup (dwelling place of many priests.) Kaho village is inhabited by Meyor tribe. The total population of Meyor tribe spread across Kibithu and Walong circles is only about 900.