Speaking on the occasion, the Governor said that Sardar Vallabhbhai Patel was one of the greatest freedom fighters and the main uniting force of ‘Independent India’. The Governor called upon the people to emulate the dedication and sacrifices of Sardar Patel and be inspired by his virtues and visions.

The  Governor administered pledge to the officers and staff of Raj Bhavan and appealed to the people to live upto the Rashtriya Ekta pledge and asked them to act as a patriotic force for ‘Ek Bharat Shreshtha Bharat’. 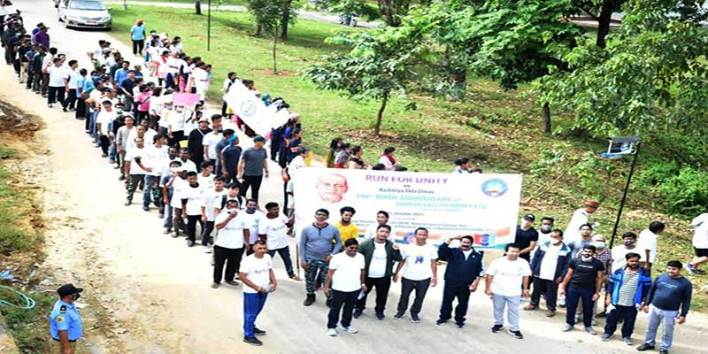 Rajiv Gandhi University celebrates 146th Birth Anniversary of Sardar Vallabhbhai Patel and Rashtriya Ekta Diwas (National Unity Day) on 31st October to commemorate Late Sardar Vallabhbhai Patel, one of the most prominent figures in our freedom struggle. On this very special occasion, RGU Organized Special cleanliness drives as part of Swachhta Mission at Doimukh market place and nearby area,  A ‘Run for Unity’ was organized from the Doimukh Taxi stand and ends at Wall of Heroes. Students of NSS & NCC cell, RGU Faculty fraternities, administrative staff and students of RGU and others participated .