Khandu, on behalf of the state government and the people of Arunachal Pradesh, welcomed Gopichand and expressed gratitude for inaugurating the tournament.

“Your mere presence in the beginning of the tournament is a huge encouragement and inspiration for our young shuttlers as for them you are the real star,” Khandu said during the simple opening ceremony.

He advised the participants not to worry about the results but give their best to each and every game they play.

“Winning or losing is not as important as participation and giving it your best shot. Keep up the spirit of sportsmanship – win with humility and lose with dignity,” he said.

Talking about the overall sporting scenario of the country, Khandu credited the supportive and proactive role of the central government under Prime Minister Narendra Modi that have catapulted India as a major sporting nation in the international arena.

He cited the medal winning performances of Indian athletes in the last Olympic Games and the recently held Commonwealth Games.

“Last 7-8 years have witnessed a paradigm shift in the performance of our sportspersons of all fields. Arunachal Pradesh, as a small state, too has seen its sportspersons shining at various levels,” he observed.

While recalling the role of his late father and former Chief Minister Dorjee Khandu, in whose memory the annual tournament is held, Khandu said the state government is committed to provide all facilities to budding sportspersons both in infrastructure and opportunities.

He informed that since 2016, players from the state have bagged 314 Gold, 212 Silver and 277 Bronze medals in various recognized international, national and zonal games.

“We are building world class infra like indoor and outdoor stadiums. One sports academy is being made functional in eastern Arunachal. We have approved construction of stadium in Tirap district. The work on stadiums at Aalo, Tezu and Chimpu is being reviewed regularly for early completion,” he revealed.

Appreciating ASBA for its relentless efforts to provide facilities to young shuttlers of the state, Khandu insisted that the 6 court badminton facility being developed here be completed as early as possible.

“I request the department concerned to complete the 6-court facility at the earliest and hand it over to ASBA to facilitate conduction of events and trainings,” he said.

The weeklong tournament will consist of 26 events with nearly 300 players including 69 women players. 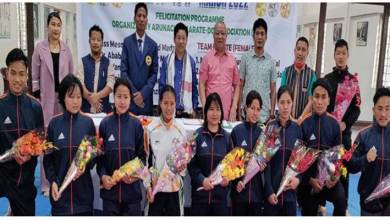