TAWANG-   Union Law Minister Kiren Rijiju’s convoy was temporarily stuck here yesterday due to heavy snowfall in Tawang, Arunachal Pradesh.  During this, after getting down from the car, Kiren Rijiju pushed his car himself. The Law Minister made a video pushing the car and shared on Twitter.

In the video, Rijiju can be seen walking with the police personnels amid the heavy snowfall. The minister also helped the cars by showing the way. His latest video has taken over the internet as many Twitter users have reposted it and expressed gratitude to the minister for sharing the information.

While advising the tourists,  Rijiju wrote that there is heavy snowfall in Baisakhi, Sela Pass and Nuranang. Tourists should take complete information before going to these areas. Because the road has become very dangerous amidst snowfall and the temperature is going up to minus 25 degree Celsius.

Advise to tourists visiting Tawang in Arunachal Pradesh at this point of time. It is reported heavy snow fall between Baishakhi, Sela Pass and Nuranang. Pls get proper information before you move because the road is extremely dengerous to drive and temperature goes down to -25 ! pic.twitter.com/sLYM9aF4Fh

The ppeople who are passing this area during the snowfall has shared pictures of snowfall.  In a photograph, we can see that the  Indian Army and  Border Roads Organization are helping people who  get stuck due to heavy snowfall. 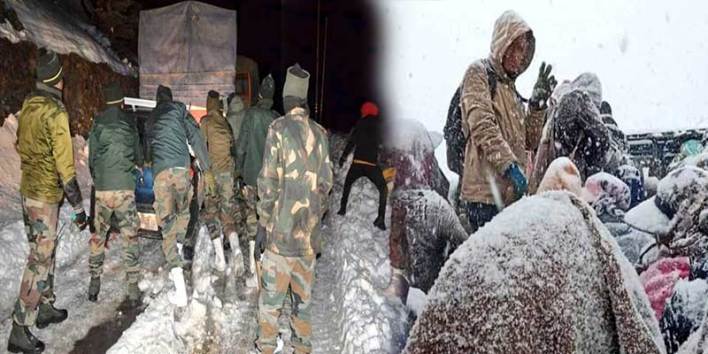 Meanwhile, the  district administration has advised to all commuters that due to heavy snow fall in Jang, Jaswant Garh, Dzela and west kameng side of Dzela no vehicle is allowed to travel without vehicle wheel chains.