The trial and error assumption shows that nearly 30% of the deaths occur in the rural as well as in Suburban areas are due to either Hypetocellular Carcinoma, a liver cancer causes due to Alcoholic consumption or due to consumption of adulterated Brown sugar. These two outlets are found almost every nook and cranny in almost all the districts headquarters and circles in Arunachal pradesh, or we can say the rise of drugs and alcohol abuse in Rural populace of Arunachal Pradesh is touching the optimum

The many decades old Kharsang town in East Arunachal is fast gaining notoriety for illicit drugs trafficking which is posing a serious threats to the future generations. Use of hooch, narcotics such as Opium and Ganja(Marijuana) and other psychotropic substances like brown sugar and heroin by the teenagers and consequent rise in anti social activities are causing grave concerns among the conscious citizens of the township.

Report says that more than 500 youths including school going children of Changlang district have fallen into the trap of drugs. It is also alleged that some of the limbs of the law personal are also addicted to these psychotropic substances at Miao, Kharsang, Jairampur, Diyun, Bordumsa and Changlang headquarter. The time has come to retrospect at the gravity of the situation now else the day is not far when the coming generations would be seen living undignified lives and the crimes rate would become uncontrollable.

It is also reported that the contraband substances are being peddled into Arunachal pradesh via the adjacent state and the bordering countries being unaware of destroying the youths of the state who are the back bone of the society. As a result women groups are being form in every villages and they have succeeded up to some extend to curb this menaces which is a welcoming step in the society.

This good Samaritan needs to be encouraged from government exchequer as well as from Non governmental agencies from time to time. Lip services from public leaders and political officers will not serve the purpose as long as permanent rehabilitation services are structured. Some of the addicts vehemently alleged that they got into this drugs cobweb mainly due to unemployment befitting “Idle mind devil workshop”.

The elite sections also have been blaming the police and excise officials too for ignoring the alarming situations. They also alleged that besides illicit trading of narcotics and contraband substances, drugs related crimes are being committed under the very nose of police and Administration. Nevertheless, an unholy nexus between the illicit drug peddlers and a few unscrupulous persons from the villagers cannot be ruled out.

People say that despite massive public concerns over the rise in drug abuse, the law enforcing agencies are not taking concrete step to prevent the offensive activities in the district. Not only this but an easy access to adulterated liquor and narcotic substances result in rise of anti social activities in the district. In the wake of this situation, the government must think twice to grant the IMFL licenses to business fraternity for the sake of filling up the state exchequer through the revenues to the brim. Not only are the drugs, the curse of alcohol is also a great concern to the society if attention is not paid where there is more wine shop than the phamacies in any corners in the state. If Nagaland and Mizoram can become a dry state ironically then why not Arunachal pradesh?

Government agencies and civil societies including student union should realize the gravity of the situation and fight jointly to eradicate the drug menaces in the district in particular and in the state as a whole.

The government is even unconcern when they are approach for financial assistant to start up the lone registered society called “FREEDOM HOME” for start up of the rehabilitation centre at Kharsang township where the plight of drug addiction is maximum as compare to other circles in the district.

The chairman and founder of the Freedom home has submitted the proposal for financial grants a number of times but never been approved. Even the local police lock up is overcrowded with local petty criminals that are drugs addict who have committed under the influence of psychotropic addictions.

It is interesting to note that even the officer in charge of the law enforcing agency are of the opinion that the circle should have at least one rehabilitation centre where these petty criminals who are apprehended  could have been house arrested in the rehab centre where proper counselling could have been given, thereby showing them a right track of lives. 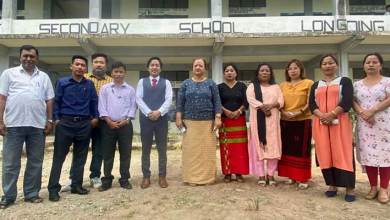