Now in its fifth year, the Tawang festival has established itself as global event with presence of U.S. Ambassador to India, Mr. Richard Varma.

The Assam Chief Minister, Mr. Sarbananda Sonowal, the Chief Guest for the event said the presence of U.S. Ambassador to India in the festival means the American President, Mr. Barack Obama will come to know about the festival through Mr. Verma soon. 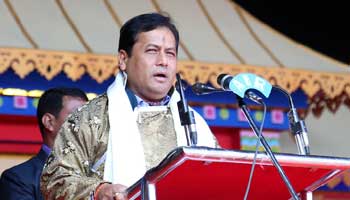 Mr. Sonowal appreciated the Arunachal Chief Minister, Mr. Pema Khandu who with his global vision had taken lots of pain to make the festival known all over the world. “That is why your Chief Minister has extended invitation to U.S. Ambassador to India to make this town event a global event,” said Mr. Sonowal to a gathering here at festival ground.

Mr. Sonowal said the Tawang festival is known not only among Arunachalis and in the country, but is known through out the world.  He later declared the three days festival open at the end of the inaugural event in presence of Deputy Chief Minister, Mr. Chowna Mein, Health Minister Mr. Jomde Kena, Parliamentary Secretary Mr. Jambey Tashi, and MLAs Mr. Tsering Tashi, Dr Mohesh Chai, Mr. Paknga Bage, Mr. Laisam Simai and Mr. Kaling Moyong.

The Assam CM also spoke on various welfare initiatives being taken by the centre for the North East under the able leadership of Prime Minister of India, Mr. Narendra Modi.

The Arunachal CM appealed the people to cooperate with state government to make tourism industry a success in the state. He said though the state has high tourism potential but the communication bottleneck is one major impediment for the sector to flourish. Mr. Khandu informed the Tawang people that bearing in mind such bottlenecks, the centre under PM Modi has given special preference for the state.

Mr. Khandu, chief patron of the Tawang festival said that Assam and Arunachal has maintained deep cultural ties from ages. So to celebrate this bonding, the Assam Chief Minister has been invited to be part of the festival, he informed and thanked Mr. Sonowal for accepting the invitation.

Mr. Varma earlier thanked the people of Arunachal and especially Tawang for extending invite to him, on behalf of American people and Mr. Obama. He said the U.S. – India relation is all time high and the country is looking towards India to work together in the field of tourism and technology.

18 exhibition stalls were set up, amongst which Monpa stall from Mukto and Lumla demonstrated the process of handmade paper and shengmar-akhmar making respectively. While various medicinal plants were displayed highlighting their respective uses in the Gomkang Nursery Stall, Monpa pottery making stall of Industries department displayed the age-old art of pottery making.

This was followed by Mangalcharan prayer, which was recited seeking infinite blessing of the dieties for auspicious beginning. Different cultural tableaus and cultural troupes from various tribes of Arunachal and neighbouring state Assam showcased their rich tradition and culture.

The evening cultural show of the first day of the festival, will have performances from the Brooks (Lobsang Deleg) and New York based Nepali singer, Mr. Raju Lama. Also the cultural event will have ethnic dress show that would showcase the traditional attires of Mago-Pangchin, Tsoksum and Brokpas.

Next of Kin of BSF Martyrs Felicitated on Police Commemoration Day