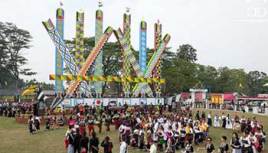 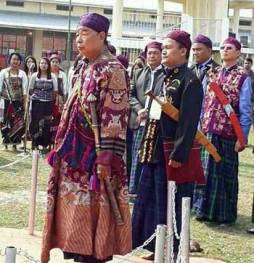 Later the Poi Baw Manau (inaugural dance) was performed where many people participated in the dance (manau) around the Manau shadungs (the ceremonial pillars) at the Singpho Heritage Centre, Bordumsa. In the evening, another round of manau (dance) Kumrum Manau (Get Together Dance) was performed which was brilliantly complimented by fireworks.

The whole day also witnessed registration of delegates from various parts of Assam and Arunachal Pradesh. The festival will conclude on the 15 February, 2017. 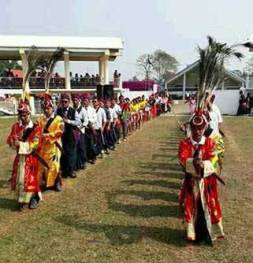 On 14 February Chief Minister Pema Khandu and Deputy Chief Minister Chowna Mein will grace as the chief guest and guest of honour respectively. State BJP President Tapir Gao and a host of other dignitaries are also expected to be present on that day.The chief minister will be launching the Singpho Multi-Lingual Dictionary Mobile App during the ocassion.

The Tikhak community, which is considered a close bethren of the Singphos are also participating during this edition of the festival. Atleast three delegations fro the Tikhak community will partake in the festivities. Delegations from the Zo Reorganisation Organisation (ZoRO) and Mizo Zirlai Pawl (Mizo Student’s Association) have already arrived yesterday and participating in the activities of the festival.

On the ocassion of the inaugural day of the four day Shapawng Yawng Manau Poi fest President Singpho Development Society Sri Jowkhong Singpho extended his profound good wishes to the Singpho bethrens and all the communities of Arunachal Pradesh.