On the 77th birth anniversary celebration of Sahitya Surjya Luminous Lummer Dai, The Arunachal Information management pays its humble tribute to the hallowed memory of the great legend Lummer Dai –

Millions of people are born in this world every year. But only a few are remembered because of their contributions in different fields. The great son of Arunachal Pradesh Luminous Lummer Dai is one of the greatest personalities of the state who has left behind his footprints on the sands of time through his famous and much-applauded literary work in Assamese. When his Assamese novels like Paharor Hile Hile, Prithibir Haahi, Mon Aru Mon, Upor Mohol, Kannya Mullya etc, were published the people of Assam were taken by a surprise thinking that how could a non-Assamese from Arunachal Pradesh could write so eloquently in chaste Assamese on an entire gamut of subjects. Lummer Dai’s books took the Assamese literary circle by storm. 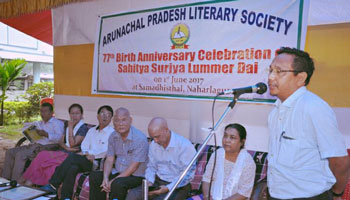 They say that many young Assamese studying in schools and colleges mistook him to be an Assamese mainly because they could never imagine that a non-Assamese could use the Assamese language so nicely in describing the daily life’s vicissitudes of the tribals of Arunachal in particular. With the release of his famous novels, Lummer Dai became a household name in Assam. His contributions were known and acknowledged much later in his own home state Arunachal Pradesh. Later, Lummer Dai became a regular member and prominent figure in all the Assamese literary circles, especially in Assam Sahitya Sabha. The grateful people of Assam showered upon him with many Awards.

Born in Siiluk village under Mebo circle in East Siang district of Arunachal, Lummer Dai was one of the pioneers in spreading education in the hitherto educationally backward state Arunachal Pradesh, then known as NEFA. He was in fact, amongst the first generation of educated people in the state. Lummer Dai later joined the government of Arunachal Pradesh as the Director of Information and Public Relations during which he wrote many books in Assamese. He was an epitome of simplicity and quintessence of honesty and integrity during his whole service life. He was loved and respected by his staff and the people as a whole because of his sincerity, childlike innocence and of course, his gifted skills in writing. They say that his real name christened by his parents was Ngomson but he became popular as Lummer Dai and this name stuck with him till his demise. Late Lummer Dai was the first person in Arunachal who introduced the first newspaper published from  Itanagar; Echo of Arunachal. Little wonder then he can be described as the architect of media in the state and also the architect of the IPR department. Like the great writers around the world, Lummer Dai will remain immortal in this otherwise mortal and transient world thanks to his immense contributions in the field of Assamese literature. He will be forever remembered by the people of Arunachal for so beautifully and efficiently  show-casing the culture of the state through his creative writings. His name will always be inscribed in golden letters in the annals of Arunachal’s literary history. He has shown the path to the state and the onus is now on the educated youth of the state to carry forward the rich legacy left behind by the great literary doyen of the state. The youth should follow his footsteps by writing books about the state Lummer Dai was born and was so proud of. His life and literary works should inspire the youth of the state to cultivate reading culture and writing culture. As of now, the youth had blissfully forgotten and conveniently ignored the pursuit of knowledge in the quest to become rich overnight. The youth have become too individualistic and materialistic in their approach to life. No society can prosper and flourish in a healthy manner when the growth of knowledge and intellect is not taken care of or priotized.