Extending his Solung greetings, the Chief Minister Pema Khandu said that Roing has a special place in my heart, as it was here that he had made his first public visit after he joined the government in 2011 as WRD Minister. 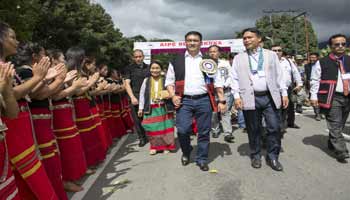 The Chief Minister was accorded a warm reception at the town helipad by hundreds of people from all walks of life who gathered to have glance of the country’s youngest Chief Minister.

He was later warmly received at the venue of Solung celebration at Adi Gidi Notko by Adi ponung and Tapu war dance party.

The Chief Minister participated in the ‘taku tabat’ ritual performed for overall well-being of all living being. This was followed by inauguration of exhibition stall by the Chief Minister that had on display traditional items, handlooms etc.

Responding to a public memorandum submitted by Dambuk MLA Gum Tayeng, the Chief Minister assured to sanction a new building for Adi Gidi Notko in this financial year. He also assured to take up the public demand for a police station in Shantipur check-gate to be discussed in the next cabinet sitting. He said if the police department desires a police station, it will be sanctioned.

Speaking on the potential that Roing offers, the Chief Minister said the people here are blessed as they are gifted with flat cultivable land and good connectivity unlike people in remote mountainous areas. He therefore appealed the people to plan their investment and business accordingly so that they can reap the fruits of their hard work.

On recent cabinet decision to create a department of indigenous faith and cultural affairs (DIFCA), the Chief Minister said the objective of the department is purely to preserve indigenous tribal beliefs and traditions, and is not against any religion. He said government will never work in favour or harm the interest of any religion. The DIFCA is for all tribal faiths and is to protect indigenous beliefs. He said the government will never take such step which will undermine the secular character of the state. He further said department of art & culture has some limitations due to which it is not able to fully support the effort to preserve the local culture. 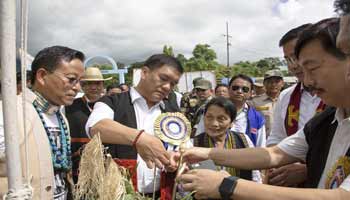 On Tibetan Rehabilitation Policy (TRP), the CM said several unions and organisations have expressed their opposition in media without seeking any clarification from the state government. He said the TRP is Govt. of India policy of 2014 under Ministry of Home Affairs. This policy has been adopted in all states wherever there are Tibetan refugee settlements. However, TRP policy is yet to be fully adopted in Arunachal due to issues over land and jobs. The CM said the policy has only been agreed in-principle and not passed in toto. It will be framed only after Arunachal comes up with its own rehabilitation policy, which will be made in consultation with all stakeholders like student and community bodies. He said the state government will never give away any kind of rights to any refugees, which is detrimental to the interests of indigenous people of Arunachal.

“I have four kids but I never bother to send them away to abroad or in other states for their studies. I want them to grow in our local environment so that they can be acquainted with their culture and dialect first,” said the Chief Minister.

Speaking on state government’s priority sector, the Chief Minister said education and rooting out corruption is it’s topmost priority. He said the government is working to make merit count and has decided to form staff selection commission (SSC) for recruitment of group B and C staffs.

The Chief Minister assured the people that this will not be his last visit to Roing. He said he will come back with much bigger announcement in his next visit.

The Chief Minister released an Audio Album ‘Rela Manam’ on the occasion.