Chief Minister Pema Khandu inaugurated a new academic building of VKV school here on Sunday, followed by inauguration of a 200-boarder facility VKV hostel building by Deputy Chief Minister Chowna Mein. Both the buildings are funded by NHPC Ltd under its CSR scheme and are constructed by Peri Pumbh Association, a local NGO here. 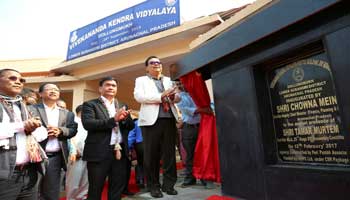 Dedicating both the buildings to the local people, Chief Minister lauded the achievement of VKV in their contribution to the education in the state and promised to release Rs 2 crore for the school under RE. He also promised to release the entire pending corpus amounts for the VKV.

He advised the students and the public to give the teachers the respect they deserve, who often are treated inferior to engineers and other government officials.

Calling teacher as the one who shapes the children’s lives, Khandu said the state government has given high importance on recruitment of quality teachers. For that the government has decided to bring in qualified aspirants even from outside the state for subjects such as Maths and Science. He, however, said that their filling up of the post will be subject to non-availability of native tribal candidates.

The Chief Minister said the state has all the ingredients to become a self-sustainable and developed state. But what it lacks is in having proper policies to tap the vast natural resources and to convert it into revenue generating sources. Also to use the potential of the youths who are graduating from colleges each year, the state needs to find avenues to find them with proper employment assurances. 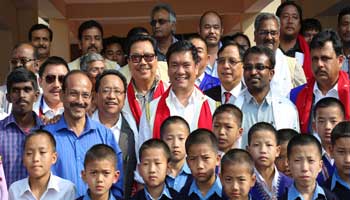 “We always hear the state has potential in agriculture, horticulture and tourism. I assure we will get to see it now that we are preparing a budget, which will be a participatory and inclusive one,” said Khandu.

He said that all the comments and suggestions posted on his official Facebook page regarding the budget are being read, and the best one will be soon announced.

Assuring the people that all pending promises of previous Chief Ministers will be fulfilled, Khandu announced that a requirement for a SDO headquarter will be immediately addressed.

He also assured to take up with the home ministry regarding the long pending demand for an IRBN headquarters at Dollongmukh. On demand of local people to stop firing practices by Indian Air Force, the Chief Minister assured to take up the matter with the defence establishment.

Earlier in his speech, Deputy Chief Minister Chowna Mein lauded the visionary steps of late Chief Minister, Dorjee Khandu who acknowledging the importance of VKV and RK Mission in the state had provided them with corpus funds and all financial helps on time to time. He acknowledged that it is due to his support that VKV is able to function smoothly without financial hitches.

On demand of people for a post of Assistant Engineer in Dollongmukh, the Deputy Chief Minister promised to fulfill it, whose foundation stone for the office was laid by former CM Nabam Tuki.

Subansiri Lower Dam is importance for both state and country- Khandu