Thousands of people thronged to Hong village situated near Ziro town to revel in free food, especially pike & drinks during an “open for all food and drinks celebration” starting from Sunday.

Amidst unending revelry tipsy guests were tumbling all around with the smell of local drinks like Oho ala and takung apu  intermediating between the cool breeze. Homes of the local Tanii tribe with enigmatic babos juxtapose the evergreen bamboos, cocooned in angelic foliages of fine trees all around.

The entire affair turned out to be somewhat chaotic with cars & bikes honking in the cramped, dusty, narrowed village road in efforts to break away from the seemingly perennial deadlock, leading to occasional brawls.

Read this also: ZIRO- the place of Apatani Tribe

Such a state of affairs sparked a heated interactive session in the village social media forum. Lead by untiring elders like Tapi Tai and EE, the villagers managed to meticulously chalk out a plan for one way traffic for the duration of festivities. The district traffic police also chipped into the plan and Hong village youth volunteered to extend a helping hand.

Village elder Tapi tai gave details of the areas where the traffic had an endemic bottleneck and I briefed the district traffic police officers to show them police discipline, courtesy in the midst of curious villagers who have never seen traffic cops regulating in their remote village .

Few  elders like Hibu Aka , Punyo Tupe sponsored a sumptuous traditional myoko lunch for the traffic police officers. Improvised wooden traffic signages made from locally available wood were painted by  Punyo chobin and I made a surprise check to make sure everything was as planned.  The efforts finally paid off as all vehicles followed the one way plan for whole villages….no jam during the Ajing Bo ceremony. Volunteers enthusiastically directed traffic to assist the traffic police.

For me, it was historic to see the local youth, police and village elders chipping in to better manage their village’s small problems, making a huge difference during the festive celebration, a first in any Apatani village on the eve of Myoko. 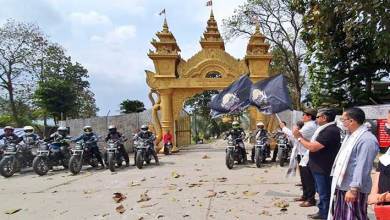 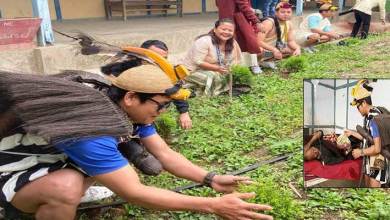