Namsai district is all set to host the 3 day cultural extravaganza of Poi Pee Mau Tai 2111, the New Year of Tai communities with a theme ‘Say No to Drugs’ from November 29 to December 1. The event will be organised by the Poi Pee Mau Celebration Committee under the aegis of Tai Khampti Development Society (TKDS) and in collaboration with the district administration.

The Poi Pee Mau festival is an annual event to showcase the Tai community traditional and rich cultural heritage in all its ethnicity, diversity and grandeur. It is more significant as it falls in the last part of the year and provides an occasion to bid adieu to the old year and welcome the New Year with renewed hopes. It has also become occasions for us to reflect on where we are headed as society. This festival has become a global festival to showcase rich Tai community culture and tradition. 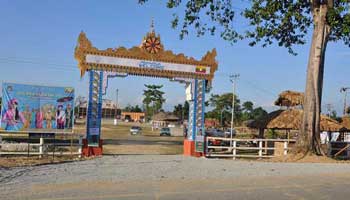 To look at a way to approach substance use in minors and within the youth of the community with compassion and love and to show that the community is behind them, the organizing committee with an aim to create more agents for positive social change and to gain attention of the young minds has put up several hoardings with different messages in the festival ground that will raise awareness and educate on rampant substance abuse affecting young people.

Notable performers from various places of the country and abroad are line up to perform during the three day fiesta which will include likes of Royal Thai cultural troupes from Thailand and Thai Embassy New Delhi, singing sensation from Bollywood also a music composer and lyricist Sona Mohapatra, DJ Arshad and a local band from Itanagar.

The Deputy Chief Minister Chowna Mein and MLA Namsai Chow Zingnu Namchoom are closely monitoring the overall development of the festival ground like conceptualizing, designing, execution and supervision of structures and related infrastructure, including exterior and interior decoration, development of site, infrastructure service, general ambiance etc. and related event management work including arranging sports/adventure activities. They have been also conducting several rounds of review meeting with the district administration and the festival celebration committee to ensure smooth conduct of the festival.