Adi Community working in Namsai District celebrated the Solung Festival in a befitting manner at Solung-Mopin Ground in Namsai on Thursday.

Attending the programme as the Chief Guest, Deputy Chief Minister, Chowna Mein called to jealously preserve the folklore and folksongs of the Tribal Community of Arunachal Pradesh. 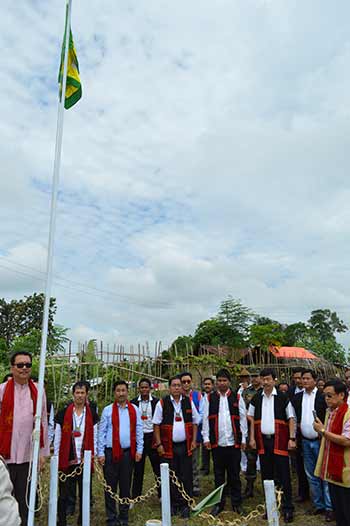 Mein said we should not only limit our celebration in songs and dances but more emphasized should be given on preservation of our cultures and language for which we have to create platform for the younger generations to participate and compete in such cultural item. He also stressed on promotion and marketing of the traditional arts and crafts in such festive occasions and mooted to open handloom centres for each tribe of the state so as to promote and market the finished products of traditional arts and crafts. He said that along with the celebration of festivals, cultural, economic and agricultural revolution should come at the same pace.

He further informed that research and documentation of Idu Mishmi Healing System will start soon which may take 2-3 years to complete. He also opined to make documentation of Tribal Dormitory System of Adi and Wancho Communities. He added that the Director of Research has been asked to come up with more innovative ideas and proposals to preserve and promote rich cultural heritage of our State.

Tapir Gao, BJP State president attending the programme as the guest of honour called upon the Adi Community working in Namsai District to work sincerely and dedicatedly. He urged them to contribute wholeheartedly in the development of new district, Namsai into a model district.

He reiterated that the political stability is in place in the State and the State is progressing in the path of development under the dynamic and able leadership of Chief Minister, Pema Khandu and Deputy Chief Minister, Chowna Mein. He further prayed for the peace and progress of the State on the occasion.

Chief Guest also gave away the prizes of various games & sports events held during the month long festival celebration. Folk & Modern dances, Ponung and a traditional show on origin of Solung Festival were the main attractions of the day.

Earlier, the Chief Guest unfurled the Festival Flag and participated in the Taku-Taabat ceremony.