He said this during the state level advocacy workshop organized here by PHED & WS department under Swachh Bharat Mission (Gramin) in culmination of the ‘Swachhta Hi Seva’, a fortnight long cleanliness campaign to commemorate the 148th birth anniversary of Mahatma Gandhi.  The workshop is organised to sensitise government officials, NGOs and stakeholders towards achieving 100% ODF in Arunachal Pradesh. 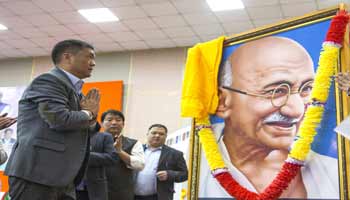 The Chief Minister said it is a moment of happiness that two group of participants from Arunachal will be receiving award from PM today during the event to mark Swachh Bharat Diwas at New Delhi. He congratulated PHED department for winning the award for its low cost bamboo technology for construction of twin pit toilet. He also congratulated the students of Don Bosco, Palin for winning the award for their filmmaking in the topic ‘my contribution to make my country clean’.

The Chief Minister informed that more than Rs 20 crore has been allocated to the PHED & WS department for cleanliness mission expressing that state government is serious about sanitation and hygiene issue. In order to reconstruct and renovate non-functional toilets across the state, the department has been allocated additional Rs 20 crore. He said Arunachal is the only state in India to allocate Rs 8000 from its treasury for IHHL in addition to its 10% share of Rs 1200 towards centre’s contribution of Rs 10800. 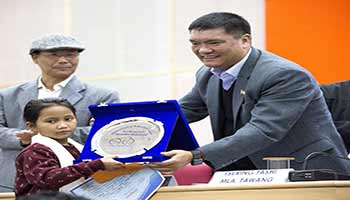 The Chief Minister said Arunachal is much ahead in Swachh Bharat Mission and is ranked 7th position in ODF free status. He appealed the people to adopt cleanliness mission with religious zeal as Arunachal is much dependent on tourism industry. Cleanliness of our villages, towns and surroundings will give much boost in success of tourism in the state, he said.

To encourage cleanliness in the state, the Chief Minister said the state government will launch competition of cleanest district in the state, in addition to cleanest village in the district. The winners will be awarded during statehood day celebration every year, he said and lauded the achievement of Jirdin village in West Siang district for being awarded with cleanest village in the district. The Chief Minister hoped that with such sense of competitiveness, cleanliness will get big boost at village, town and district level.

The Chief Minister further urged on the importance to preserve water bodies as with growing population, drinking water is becoming scarce. He appealed the department to bring out with water conservation policy to be adopted by the state government soon.

Earlier the Chief Minister unveiled the official logo and slogan of Swachh Arunachal Mission designed by Mijong Ripuk of Bolung village in Lower Dibang Valley. He appreciated Mijong for bringing out an inspiring logo that represented greenery, rivers and mountains. The Chief Minister also launched the Swachh Arunachal youtube channel showcasing short videos on cleanliness mission carried out by PHED department in the state.

The Chief Minister felicitated the award winners and performers in the field of Swachh Arunachal in the category of essay competition, film competition and painting competition. The awardee list also included NGOs, social and community organisations involved in cleanliness mission.