The 6th death anniversary of former Chief Minister of Arunachal Pradesh late Dorjee Khandu was observed today at the Dorjee Khandu Memorial Museum here at Tawang with a school outreach programme on the theme ‘Learning History Through Museums’. 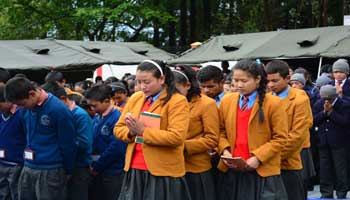 The program began with a brief account on the life of late Dorjee Khandu by one of Tawang’s most recognised public speakers, Ngawang Chota of the All India Radio, highlighting his life’s journey from being born in a humble family to how he later dedicated his life to the service of the poor.2 short films, one by local renowned filmmaker and actor Sangey Tashi, on late Khandu were also screened depicting his life’s story from working in the Intelligence Services to achieving the height of leadership in State politics.

After a brief presentation on how museums help students in understanding ancient as well as contemporary history, the students were taken on a tour of the museum by the museums’ guides; briefing them on the various achievements of late Khandu as well as taking them around in the gallery dedicated to His Holiness the Sixth Dalai Lama. 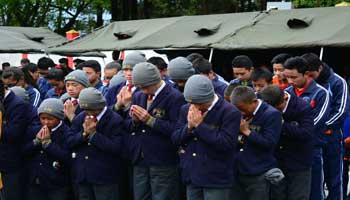 Eshida Miwu of the KDS Nursing School, Tawang shared that the tour was a great experience and that they had gained much knowledge about the life and contribution of former CM Dorjee Khandu.

“The experience of coming to this place was beautiful. Me and my friends felt really enchanted. This place, made for our late CM, really makes us feel proud of him. So we thank everyone for telling us so much about him and we all will also try to be a good human like him”, shared Tenzin Tsomu of the  Tawang Public School.

Another student said that it was a very enlightening visit, “a great insight into the lives and times of 2 great persons”, referring to the exhibition on His Holiness the Sixth Dalai Lama.

Students were later seen offering prayers and paying their homage at the cremation site of late Khandu. Earlier in the morning, lamas also offered memorial prayers at the Jangchub Choeten in the presence of family members and well wisher of Late Dorjee Khandu.