As the team slogan says, Together and United, Nothing is Impossible. Yes, that’s exactly what a young team from Shillong, North East India has done and reached a big milestone today and has sailed through to the Federation Cup Semi-Finals  2016.

Shillong Lajong FC braved the heat and fought like warriors against Kolkata giants East Bengal FC on wednesday, and perhaps played one of the most thrilling and entertaining matches of all time, drawing the match 2-2 and winning the tie 4-3 on aggregate at the Barasat Stadium in Kolkata today. Lajong had beaten the East Bengal side in Shillong First Leg, 2-1 on the 1st May.

As some would say, this was a sweet revenge for the Lajong Faithfuls and the team to knock out the Kolkata outfit, as Lajong had lost the finals of the Federation Cup in 2010 against East Bengal on penalties. 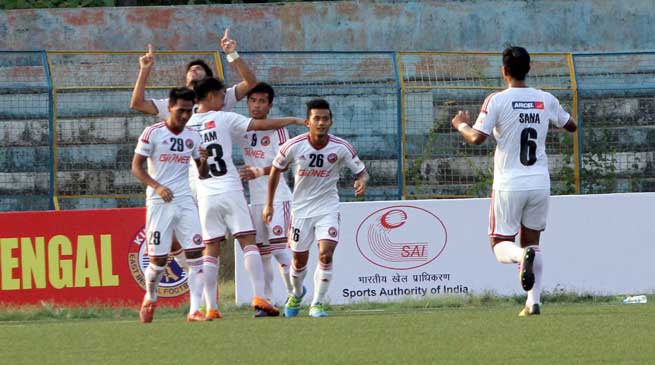 6 years has passed now, the team is playing with their youngsters from the Academy with the inclusion of a few experienced players.

Lajong scored the first goal when Fabio converted a penalty in the 17th minute. East Bengal then equalised also via a penalty by Ranti Martins in the 23rd minute. It was Lalrindika Ralte who made it 2-1 for East Bengal in the 37th minute, and levelled the aggregate to 3-3. The score line remained 2-1 at full time and hence the play had to be extended to 30 minutes extra time; that is 15 minutes of each half.

Uilliams Bomfin Souza scored the second goal for Lajong and took the aggregate to 4:3 in the 114th minute of the game giving his team the well deserved advantage to progress to the semi finals.

Lajong kicked off the match playing under unfamiliar conditions in the heat of Kolkata. The match referee had to provide several water breaks during the entire course of the match. Despite the heat, the match was played with good intensity as both teams were attacking and pressing towards the defenders. The home team had a good support from the crowd who came in numbers to rally their team to progress to the semis. Even though East Bengal looked the more eager side to find a goal, it was Lajong who got the break as Bipin’s cross hit Deepak Mondal’s hand inside the box and Fabio made no mistake in converting the penalty. The fortune shifted to East Bengal in the 22nd minute after Do Dong’s cross hit Nim Dorjee’s hand and the home team was awarded the penalty. Ranti Martins stepped up and equalised in the 23rd minute for East Bengal. 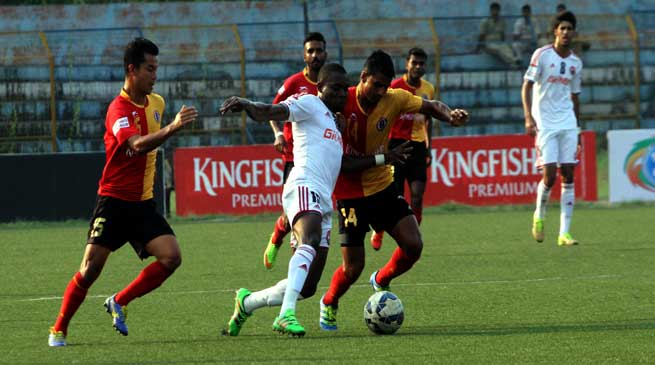 With the aggregate still 2-3 in favor of the visiting team, East Bengal kept pressing forward hoping to get back in the tie. And they did so in the 36th minute, when Lalrindika Ralte found himself some space inside the box and curled the ball past the keeper giving his side a 2-1 lead in the match and tying the aggregate at 3-3. Lajong however did not back down as they kept creating chances in front and defended the attacking threat of East Bengal.

Lajong had a great chance to score as soon as the second half kicked off when Uilliams took a shot from a wide angle but Bipin Singh missed the tap in for an easy save by the East Bengal custodian. East Bengal too had a glorious chance on the other end minutes later but failed to capitalize on their opportunity.  Then in the 53rd minute, a corner was met by Fabio Pena but his header unfortunately hit the woodwork. As the match got more exciting, East Bengal were threatening with runs from Do Dong and movement by Ranti Martins upfront. Bernard Mendy was brought on by East Bengal in the second half and made his presence felt in the midfield and attacked the ball several times. Both teams were unable to score as the match progressed lacking the clinical finish on numerous chances. Fabio got injured in the 85th minute and had to be replaced by youngster Hardy Cliff Nongbri who was quick and agile in midfield. The referee blew the whistle for regulation time and the match had to proceed to Extra Time as the aggregate remained 3-3.

The first half of extra time kicked off and both teams continued their attacking momentum in search for the next goal that would decide the winner of the tie. Sanju Pradhan, Do and Ranti were creating a lot of problems up front and the Lajong youngsters at the back met their challenge with maturity.

As the match progressed to the second half of extra time, East Bengal seemed to be the side that would get the next goal. Crosses for Ranti Martins were flowing while Do Dong also took long range chances. Lajong players were tiring but they gave everything they had and stayed in the fight. Then in the 114th minute, after an excellent run by Penn Orji with the ball from his own half, he made a diagonal pass to Uilliams Souza towards goal who then brilliantly chested the ball down and finished it with his left foot past the keeper. The Goal damaged the hopes of East Bengal as they had to score two goals with just five minutes left to get back in the game. Lajong played well throughout and ensured that they progressed to the semi finals of the Federation Cup 2016 against either Mohun Bagan or Salgaocar.

Lajong will play the first leg semi final away either in Kolkata or Goa on the 8th May and then play the return leg in Shillong on the 14th of May 2016.