The Lajong Amazing North East Diaries have proven to be a resounding success with the public at large, racking up over 1 million views over the 23 episodes broadcast so far on the club’s Facebook page alone. 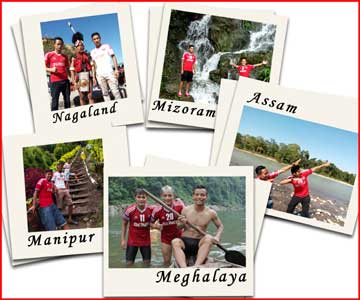 Lajong Amazing North East Diaries – Crosses One Million Views on FacebookShillong Lajong FC is overwhelmed by the response of the fans to the episodes on Mizoram, Manipur, Meghalaya, Nagaland and Assam. The total number of views as of April 18 has touched 10,67,000 while there were 43,180 likes.

This unique initiative of Lajong’s takes viewers on a journey through some of the best places to visit in the North East sister states, using our very own players who put away their football boots to act as guides and ambassadors of their respective home states, stopping off in scenic, historical or other locations of interest.

Some of the places visited include Thenzawl village in Mizoram, Kynrem Falls in Meghalaya, Loktak Lake in Manipur, Khonoma village in Nagaland and Kaziranga National Park in Assam.

The first in the series of online videos that celebrate the beauty of North East India went live on 29th October 2016 and since then anticipation for new episodes of the diaries has grown and grown. The most viewed episode was the second on Mizoram with 86,000, though this was closely followed by the first show on Nagaland, which accumulated 84,000 views. The opening episode on Manipur claimed the most number of Facebook reactions at 3,100.

The making of the videos required considerable time and effort from members of the Lajong family, who began preparations for the out-of-the-box travel series in the middle of 2016. The diaries began in Mizoram (two episodes) before moving on to Manipur (three) and the Reds’ home state of Meghalaya (three). Four episodes on Nagaland and five on Assam were then broadcast at the end of 2016 and the beginning of 2017.

Filming has posed numerous challenges, with the crew having to delay their flight from Assam to Manipur after flooding in Guwahati left them stranded for a day, while extensive time on the road and tricky shooting destinations, like in Aizawl where there was heavy rainfall throughout the shooting schedule, added to the difficulties but also provided memorable experiences for the film crew and players.

A knowledgeable maker of films and music videos, this was Barua’s first experience of such a unique travel show.

“Overall it was a wonderful experience,” he said of the series. “Lajong Amazing North East Diaries was fresh and new for me. Each state had its own beauty, its own story to tell and all the locations were absolutely breathtaking. North East India is beautiful and I am proud to be from this corner of the country,” he added.

Barua also admired the way the player-presenters handled themselves in front of the camera. Transforming into TV guides was not all that easy for some of our young Reds, but they took to the challenge with great spirit.

Among those players who admitted to having a case of nerves during shoots was Isaac Vanmalsawma, who said with a laugh, “I was not nervous at first, but just when we started shooting and with everyone looking at me and knowing that the camera was on, I was shaking on the inside and couldn’t talk properly.”

His team mate Samuel Lalmuanpuia, who is also from Mizoram, was also pretty nervous but was pleased with the whole experience. “It was such a great opportunity to discover so much about my own state because I haven’t really seen many of these places. It was an unforgettable experience,” he said.

On the Meghalaya section, both Hardycliff Nongbri and Redeem Tlang chose Krang Shuri waterfall as one of their personal highlights, with the former saying, “We visited Krang Shuri, which required a very long journey, but it was a beautiful place with all the waterfalls and the stunning blue water.”

Alen Deory picked water too, but of a different kind. He can be seen taking to the waters of the Jia Bhorelli River in a raft during the first episode on Assam, something which he had never done before, and which he described as a “very special experience.”

A lot of the players highlighted the great times they had with their team mates, which other than on the football pitch, is not something they are able to have most other times.

Junior goalkeeper Neithovilie from Nagaland was one who said, “It was a great experience travelling with my mates. We enjoyed exploring new places, tasting new delicacies and also walking in the cold and having fun at the Kohima night carnival,” while Chinglensana Singh of Manipur said, “It was more fun because we don’t really get time to spend together. It was a great holiday time for us.”

We at Lajong are also humbled and pleased that the viewing public also seem to have had just as much fun watching the diaries as our young stars had in making them.