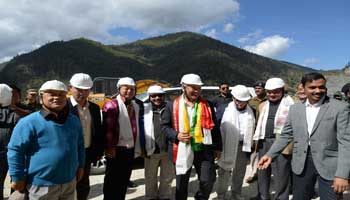 “It is not wise always to plead Government of India with a begging bowl for development funds. We must develop our own mechanism for self sustenance,” said Chief Minister Pema Khandu after laying the foundation stone of 24 MW Dikshi Hydro Electric Project near Rupa in West Kameng district today.

He was speaking about the state’s enormous potential of in hydropower, tourism, horticulture, minerals, agro-industries, etc. which if rightly and holistically harnessed would uplift the economic condition of the state and its people manifold.

Although the foundation stone of 24 MW Dikshi HEP undertaken by Devi Energy Private Ltd was laid today, the work on the project is already in full swing and is slated to be completed by last part of 2017. If the project is commissioned as per schedule, it will be the first HEP developed by a private developer in the state.

Khandu while appreciating Devi Energy said that the firm has set an example for others to emulate.

“The quality of work undertaken is of optimum level and the pace in which the construction is progressing, I am sure this project will see the light of day before scheduled date,” Khandu observed.

On request for developing another project in the downstream for 18 MW by Devi Energy, CM agreed to consider the proposal as a special case. He also assured to look into few other issues raised by the developer.

Khandu, meanwhile, reiterated that hydro power development will not be imposed on the people. General consensus will be taken on the pros and cons of any project with special focus on environmental and cultural impact, he affirmed.

Earlier in the day, the Chief Minister while addressing a public gathering at Rupa called for  team work to address development issues. He categorically asked all and sundry to shed away differences and work in unison to bring in real development in the area. He lauded the Shertukpens for bringing in a revolution in horticulture and education sector and upholding the rich cultural heritage of the area. He exhorted young to adopt the rich heritage for its preservation.

While responding to various memorandums, Khandu assured to upgrade Rupa SDO Headquarter to ADC Independent Hq and also provide funds for infrastructure development of the ADC office. He also assured to impress upon the central government for a sports stadium at Rupa.

In his speech, Speaker Thongdok, who is the local MLA, extended gratitude to CM for accepting his request to visit his constituency. He endorsed the memorandum submitted by general public and requested CM to look into the grievances on positive note.

Hydropower Parliamentary Secretary Phosum Khimhun pitched for development of Hydro power for sustenance. He revealed that the state government under the leadership of Chief Minister Pema Khandu has adopted a holistic approach towards Hydro Power to make it a reality in the state. Suitable policy and mechanism are being put in place to address the dissents if any during the execution.

Khandu Dedicates new ADC Building to the people of Kalaktang