Chief Minister Pema Khandu today appealed the people to discourage ‘polygamy’ in the state, which is customarily practised here.

Speaking during the Mrs Arunachal-2016 pageant organised by Ngurang Learning Institute (NLI), which was graced by Rajya Sabha MP MC Mary Kom here at Dree ground, the Chief Minister said he personally do not favour polygamy and wished to see the end of such practise in the state. 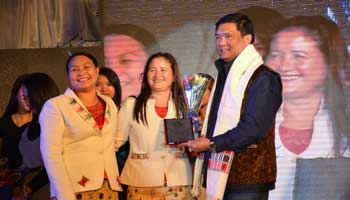 The issue of polygamy came in the backdrop of discussion on applicability of Uniform Civil Code (UCC) in tribal state Arunachal with respect to women’s right. This was highlighted in her earlier keynote address by noted women activist, Jarjum Ete. Also the majority contestant of the beauty pageant were women who have suffered due to polygamy and domestic violence.

Khandu observed that women in tribal society of Arunachal normally held respectable position when compared to other societies from rest of India. He, however, said this could depend on communities, where they follow different customs. The Chief Minister said that in the interest of women and to give them equal status in society, assured to initiate dialogue with various women organisations to discuss on implementation of UCC in the state. Also he promised that budget for the coming financial year will be ‘women-friendly’, which will be prepared in consultation with various women organisations. Khandu said he wish to see the budget to promote women’s empowerment and women’s power. Further, the Chief Minister said the budget will also accommodate the interest of all tribal communities and community based organisations will be made to play important role in its preparation. Khandu thanked the organisers of the event and appreciated it as noble and unique initiative.

In her key-note address, Ms Ete spoke on UCC and the differing opinions in its implementation. She also spoke on women’s inheritance rights in tribal society, where today they are given only movable properties as inheritance.

A 5-minute video presentation on NLI and its founder, Ngurang Meena on her struggle as women activists were narrated. Meena is known for her role in fighting for women’s right in traditional patriarchal society.