The Capital police arrested a three-member gang and found 14 stolen mobile phones, 178 touchscreen cover from their possession, according to Tumme Amo, SP, Capital.  These mobiles phone and accessories were stolen from  from a Mobile shop of Ganga Market.

Capital SP Tumme Amo inform that on 15/9/19, a  written FIR was received from one shopkeeper Mujibur Rehman Khan ” that in the intervening night of  14-15/09/19,  some unknown person had entered into his mobile shop located at City Hub Complex at Ganga Market  by breaking bricks wall and had stolen away mobile handsets, accessories, cash etc worth approximately Rs 4 lakhs. Hence, a case was  registered vide case no. 253/19 u/s 457/380 IPC  and SI N Nishant was endorsed for investigation.

During investigation, Addl Capital SP, Harsh Indora along with OC PS and IO immediately visited the PO. The sources were engaged. O Saturday information was received that some unknown persons were approaching mobile shops at Gandhi Market, Bank Tinali and Ganga Market asking for selling mobile & accessories in large quantities. 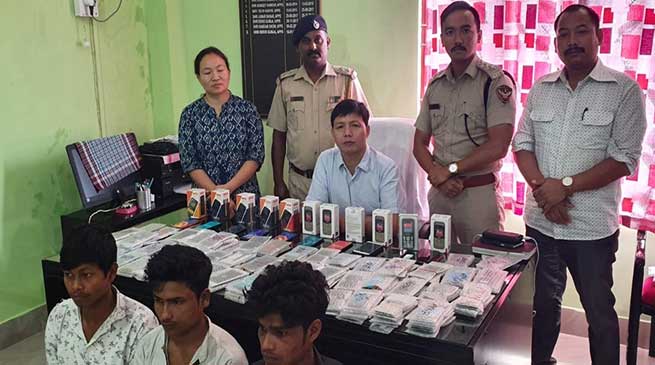 Later on, two more accomplices, namely Rajibul Islam 19 yrs and Sheikh Farid 22 yrs of Bhipuria, Assam presently residing at Itanagar were also arrested. From their initial interrogation,  it has been revealed that these three accused were earlier engaged as a masons(Mistry) / labourers by the building owner for construction of same building where they committed instant burglary as they were well acquainted with the said building. They had also got one mobile set repaired at the same mobile shop a day before the burglary. SP said.

They were produced before the Court today and have been remanded to 6 days police custody for further interrogation and investigation to ascertain their involvements in other cases or other districts or if they have other accomplices. Amo added.