Heavy downpour and a surprise element in the form of a night stage on Day 1 of ISUZU RFC India 2018, the country’s toughest international off-road motorsport event, ensured a roaring start to the competition.

At the end of Special Stages (SS) 1-5 of the competition, as per the Provisional Results, Arunachal Pradesh’s Chow Ujjal Namshum (co-driver Ingpeng Mein), who is making his RFC India debut, was at the third spot at the score board with 300 points out of 500.

Sanbir Singh Dhaliwal (co-driver Gurpartap Singh Sandhu) from Chandigarh topped the charts with 387 points and Jagat Nanjappa (co-driver Chetan Changappa) from Karnataka was at the second position with 332 points.

The other two contestants who made it to the top five on the score board are Chandigarh’s Gurmeet Virdi (co-driver Kirpal Singh Tung) with 281 points and Hyderabad’s Dr Chaitanya Challa (co-driver Shabarish Jagarapu) with 268 points, at the fourth and fifth positions respectively.

The contestants will be given a few hours after the announcement of the Provisional Results for protest, before the final results for SS 1-5 are declared.

The first day of the mega off-road motorsport event was held at an off-road location in Taluka Sanguem of Goa, with 38 teams attempting SS 1 to 5. Incessant rainfall made the tracks slippery and full of slush, making it extremely difficult for the contestants to tackle the stages.

As per David Metcalfe, Chief Scrutineer, ISUZU RFC India 2018, “The stages were designed to be tough on the participants and their vehicles. While most of the SS were already quite demanding, the rains today have made them considerably tougher.”

The teams were allocated maximum 15 minutes for completing an SS, each one worth 100 points. The competitors who were unable to finish a task within the allowed time were given a DNF (Did Not Finish). Moreover, penalties were given to the teams for making mistakes like breaking a peg or a bunting or for touching a live winch cable. These penalties had a direct impact on the team’s cumulative score for that particular SS.

Chow Ujjal Namshum (co-driver Ingpeng Mein) of Team MOCA from Arunachal Pradesh took everyone by surprise with his electric performance on the first day. He said, “Last year, I attended the event as a spectator and the rain this time is considerably more, thereby making the track full of slush and water. My first SS for the day was SS4, where I was the seventh competitor to attempt the Stage and I ended up being one of the fastest. That is quite heartening as we have practiced hard for the competition for two months straight. Let’s see how things unfold going forward.” 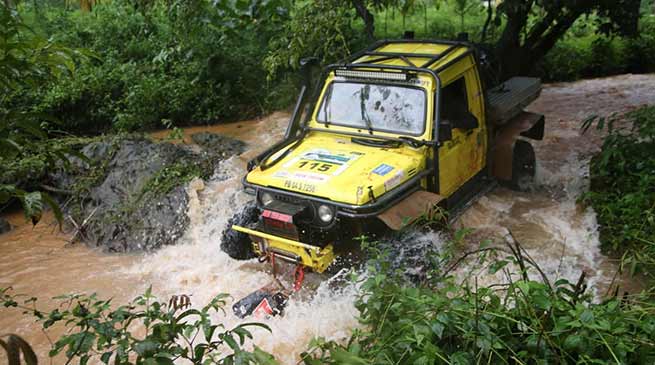 Gerrari Offroaders Chandigarh’s Sanbir Singh Dhaliwal, who was at the overall third position at RFC India 2017, had an amazing start to the competition this year. He said, “The level of competition this year has definitely shot up. The tracks today were very slippery, because of which things became quite tricky. I even suffered a minor vehicular breakdown, which I have repaired now. Overall, my focus today was on preparing myself for the coming days. Hopefully, I will be able to do well.”

SS1 was the most difficult SS of the day and remained unconquered till the end, resulting in most of the contestants getting a DNF and the others opting for a DNS (Did Not Start) remark. This Stage required the competitors to go through two very steep ascents before descending on the other side. They had to go through a gate and take a left, before taking another left and then come down. Thereafter, they had to go up again from another gate and then come down towards the finish box.

SS2 was another tricky stage and required the competitors to climb a huge incline, take a left, come down, go towards a gated box, open its bunting, enter and close the entrance bunting, open the exit bunting and pass, close-back the exit bunting of the box, before climbing up an incline, taking a left, and descending towards the exit box. 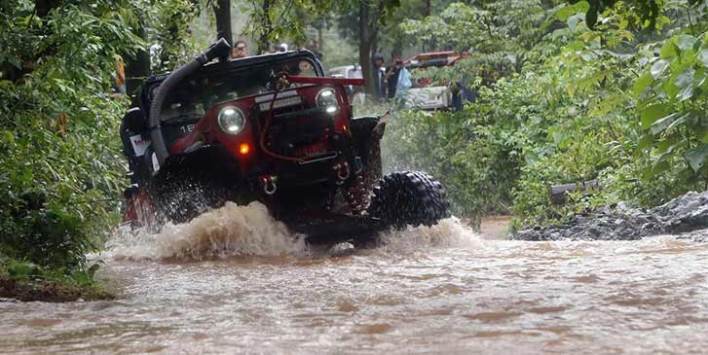 Jagat Nanjappa of Coorg-based V5 Offroaders, who was the first runner-up at RFC India 2017, said, “The first day has been good for us. We had no setbacks apart from some minor penalties and one DNF for SS1, which no one was able to complete. The tracks are quite challenging this year. So, the idea would be to play it safe and preserve the vehicle for as long as we can.”

While the day was great for some and disappointing for others, there is still a long way to go before the ISUZU RFC India 2018 Overall Champion is announced. The competition will be held at Suquerbag in Quepem over the next two days and then at the Green Hills Agri Farm in Maina, Quepem on 26th and 27th of July, before eventually culminating at the Rajiv Gandhi IT Habitat in Dona Paula on 28th of July.