While congratulating the people of the state and denizens of Capital complex for the significant accomplishment, the DCM asked the executing agency to expedite the work and complete the work before the targeted time of three years. He further said that the proposal for the Package B would be sent to the Central Government soon. 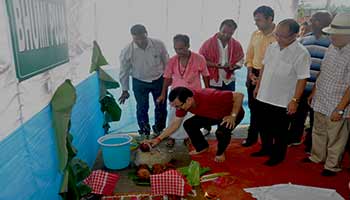 At the same time, he appealed the people to cooperate and comply with the traffic diversion and to use the alternative route during construction of NH 415 to enable smooth progress of the work which would enable the executing agency to complete the project work much ahead of the stipulated time frame. Considering the traffic congestion during the four laning, it will be of great help to use the diversion road that would ease and improve traffic movement, he added.

He lauded the efforts of the District Administration, PWD (Highway) and other officials involved in the eviction process for successfully carrying out the process within targeted time. He also thanked the citizens of Capital Complex for carrying out self-demolition and cooperating with the District Administration during the eviction. He also express hoped that the citizens would continue to provide their support till the completion of the project.

Aiming to adopt global best practices in road building, the government will encourage use of modern technology as it plans to improve road designing and bring down maintenance cost, the DCM said.

He said that cost for using latest technology will be requested from central government as the idea behind bringing in modern technology for road construction will be mainly to decrease maintenance cost so that there would be no recurring expenses later.

Parliamentary Secretary (PWD, UD and Housing) Techi Kaso, also lauded the effort of DA, PWD (Highway) and other stakeholders for the successful completion of the eviction process. He also assured that the construction would be completed at the earliest for the second Phase to start.

During the programme, the officials from Highway department presented a video on information on NH-415 and work programme and displayed a video on eviction process that was carried out.

The EPC contractor M/S T.K. Engineering Consortium Pvt Ltd will execute the work under the supervision of Public Works Department, Govt of Arunachal Pradesh whose project cost is estimated to be Rs196.16 crore.

The DC Capital Prince Dhawan informed that Traffic Diversion Plan during the construction of 4-Lane first phase package A has been made and alternate route plans have been identified. The route plan has been divided into 6 segments and the repairing works of the alternate routes would be completed before the construction for the 4 lane begins. The detailed traffic route plan would be issued in due course of time so that the commuters do not face any inconvenience.

Rohingyas are illegal immigrants "will be deported" - Rajnath Singh

Arunachal: Union Law and Justice Minister calls on the Governor