Appreciating the purchase of ambulances for the districts, the Chief Minister acknowledged the role of former health director Dr Tamut Taloh for being the architect for procurement of these vehicles. He hoped that the ambulances will of good service in the districts to provide good health services. 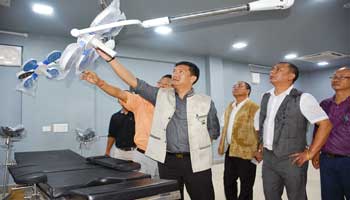 “Health sector and education is always a priority for every government and it should be,” asserted Khandu and added that providing health services in Arunachal is a very challenging task as the population is scattered and habitations are in remote places.

Despite such challenges faced, he appreciated the efforts made by the previous Chief Ministers for their hard work to provide best health care and to bring quality education to the door step of the people.

Speaking on TRSH, the Chief Minister lauded the contribution of Chief Secretary in conceptualizing the TRSH hospital and also appreciated the contribution made by late Jarbom Gamlin, former Chief Minister. Expressing his full confidence on her, the CM requested the health officials to work under the guidance and vision of Chief Secretary acknowledging her past commitment towards health sector.

Also the Chief Minister announced to make all district hospital equipped with trauma centre, however, admitting that availability of qualified doctors was a big challenge. To meet such shortages, he stated that the early start of state’s first medical college was highly essential.

To fast track land acquisition for medical college, the Chief Minister informed that several meetings has taken place with the land management department to settle all land acquisition process for Arun Medicity in Pachin colony. Also the construction works for colony roads and other infrastructures will be fast tracked, he assured.

The Chief Minister hoped that the works for medical college will see no hindrance with assured support of Prime Minister who has accorded health as a priority sector and has assured his full support for development of Arunachal.

Chief Medical Superintendent of TRSH, Dr Moji Jini briefed about the ongoing construction work of the 300-bedded state hospital and on the works for medical college.