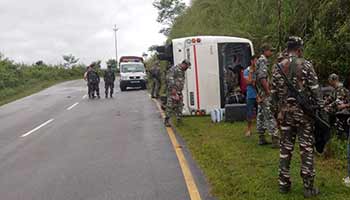 The Doimukh Police sources said that the bus was carrying 19 CRPF personnel which in route from Itanagar based CRPF 138 Battalion HQ at Senki View to Daporijo in Upper Subansiri district and meet with fatal accident this morning at around  6 AM. All injured personnel were given first aid nearby ITBP Camp Hospital at Tigdo and later was discharged.

A case would be registered at Doimukh Police Station after the FIR from authority was yet to received however the driver Ct. D. Longda was taken away by Doimukh Police who later forwarded to CHC for treatment.

However the Doimukh police said that the bus was of APP MT based at Naharlagun and driver was from 3rd IRBn was attached with MT was proceeding to Daporijo to drop the CRPF personnel, OC B. Tangzang however said accident may be due to reportedly due to steering lock and bus got capsized and few parts of the vehicle also got damaged.