Assam Chief Minister Sarbananda Sonowal on Saturday said to the media “an inquiry would be conducted into the killing of a police officer Bhaskar Kalita in an encounter with militants and to ascertain the quality of bullet-proof jacket worn by him”.

Sonowal also  announced ex gratia of Rs 20 lakh to Kalita’s family and said they will be able to draw his full salary till his retirement age. The chief minister said Kalita’scourage and sacrifice would inspire security personnel to fight against terrorism with renewed vigour.

Officer-in-charge of Bordumsa police station, Bhaskar Kalita, was killed in an encounter with Ulfa (Independent) militants at Kujupathar in the district on Friday. 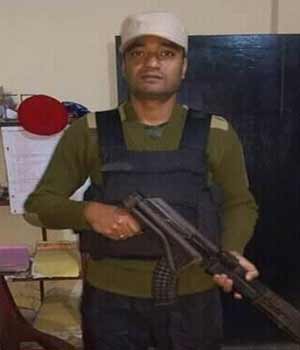 It must be mention here that the questions are being raised over the bullet-proof jackets supplied to the police force after the death of a young officer in an encounter in Assam’s Tinsukia district on Friday.

When Kalita’s body was brought to the civil hospital here, two holes were visible in his bulletproof jacket.

According to the  doctor who conducted the post- “One bullet passed through the vest and hit him in the chest, while the other hit him in the upper abdomen. There were six bullet hits. Not a single bullet was recovered from his body.  Shock and haemorrhage from the bullet injuries led to his death”.

Meanwhile  when media  questioned, director-general of police Kuladhar Saikia said here, “We will examine the ‘quality and procurement date’ of the bullet-proof jackets.”