In a major breakthrough, the Indian Army and Assam Police, while conducting join Operations against NDFB(S) Militants in Ripu Reserve Forest of Kokrajhar district of Assam have successfully apprehended six hardcore NDFB militants.

On receipt of reliable information about presence of NDFB(S) militants in the area of Raimana near Akshaiguri, SIKH LI troops of Red Horns Division laid multiple ambushes. In the intervening night  of 30 September/ 01 October 19, the ambush party noticed six individuals moving suspiciously in the area. On being challenged, they attempted to escape taking advantage of the twilight and thick foliage. However, the alert troops swiftly reacted to the situation and exercising utter restraint, nabbed all six of them after a short pursuit.

Spot questioning revealed that the six individuals were hardcore NDFB(S) cadres trained in Myanmar. They were identified as 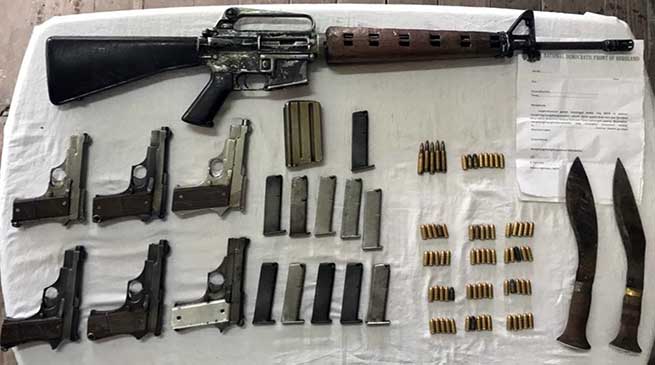 On further questioning, the apprehended cadres revealed the location of a temporary camp site close to the spot of apprehension. The troops of Red Horns Division immediately moved to the camp site and conducted a thorough search of the area. This led to the recovery of one M16 Assault Rifle, six 7.65 mm pistols, twelve magazines, ammunition, medicines, rations, along with several other war like and administrative stores.

Sporadic inputs about presence of this group were being received from reliable sources of the Army for approximately three months. Relentless efforts were therefore directed towards these cadres. These six militants belong to the handful of NDFB(S) cadres who continue to be active in the forested areas of BTAD and are evading the Security Forces. Out of the six cadres apprehended, three belong to Kokrajhar district while three are from Chirang district.

The apprehension of this group is a major setback to NDFB(S) activities in Kokrajhar district.  Due to hard living conditions, sustained pressure of Security Forces and lack of local support, most of the cadres are disillusioned and demoralized.

The Security Forces will continue to exert pressure through sustained operations till all militants of NDFB (S) are neutralised. The Army, while conducting this particular Operation, exercised extreme restraint  and ensured no harm to the militants. It accordingly exhorts remaining cadres to shun the path of violence and return to mainstream.