Deputy Chief Minister, Chowna Mein called to keep alive the Oral Literature of the Tribal Community through research and documentation. He said this while addressing a large gathering of people at Solung Ground, Pangin in Siang District today. 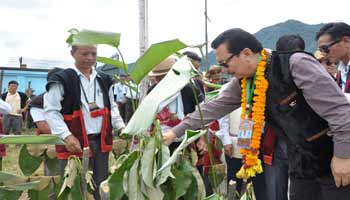 He said that tribal communities of Arunachal has very rich Oral Literature which has been pass on from generation to generation but due to absence of written script, these could not be preserved in written form. Today, we are facing fear of losing our own script, traditional chanting and healing system which need to be preserved through proper research and documentation, he said and informed that for research and documentation on tribal healing system & chanting, the State Govt has kept some fund and the task has been allotted to some foreign scholars who are experts in making such documentation.

Citing that most of the festivals of the Tribal Communities are inter-related based on socio-religious and socio-agricultural activities and all these festivals are celebrated for well-being, prosperity, bumper harvest and peaceful existence of all the mankind. He said that apart from it, the festival provides a platform to unite the society and to spread a message of brotherhood and bonhomie among different communities.

Responding to a two-point memorandum submitted by the Siang District Welfare Committee, Mein assured to look into the requirement of additional fund for completion of Nugong Bridge.

Dikto Yekar, MLA Daporijo while attending the festival as guest of honour called to minimize excessive eating and drinking during festivals and advised the students to actively participate in the festivals and at the same time to remain focus in their studies. He also called for preservation of own cultures & traditions.

Special Guest Yamra Taya, President Abo Tani Clan Organization informed that the ATCO has been formed to bring unity, peace, harmony and oneness among the Abotani Clan and said that the ATCO strives to maintain aged old traditions & customs and to preserve our rich culture.

Former Minister Tapang Taloh, who is also the local legislator in his speech emphasized on preservation of culture & traditions. He called for behavioral change and character especially among the people of the Abotani Clan towards the outside visitors and to welcome and encourage the tourists to visit their belts too.

On the occasion, Tapang Jamoh President submitted a two points memorandum to the Deputy Chief Minister for establishment of Mini-Secretariat at Nyobo (Perang Lampang) and allotment of additional fund for completion of Nugong Bridge at an early date.

Earlier, the Chief guest inaugurated the Solung Festival by unfurling the Solung Flag and performing Taku-Tabat before proceeding to the festival hall.

Colourful Traditional and Modern dances were present on the occasion.

Later, the Deputy Chief Minister along with the dignitaries visited the proposed Mini-Secretariat Site at Nyobo (Perang Lampang), near Pangin in Siang District.