Si- Donyi one of the major festivals of the Tagin community was celebrated with traditional fervour at Si- Doonyi ground Naharlagun by the members of Tagin community residing in Naharlagun, Banderdewa, Karsingsa and capital complex here today.

During the day-long celebration various cultural groups of the community performed  numbers of traditional and modern colourful cultural programmes to the loud applause of the huge gathering.

Speaking on the occasion as a chief guest, Power Minister Tamiyo Taga advocated for cultural exchange amongst every tribe of the state to understand each other better.

Stating that everyone must focus more on horticulture and agriculture sectors for sustainable development and make the state self-reliant, he appealed the youths to carry forward cultural and traditional values of their own tribes. 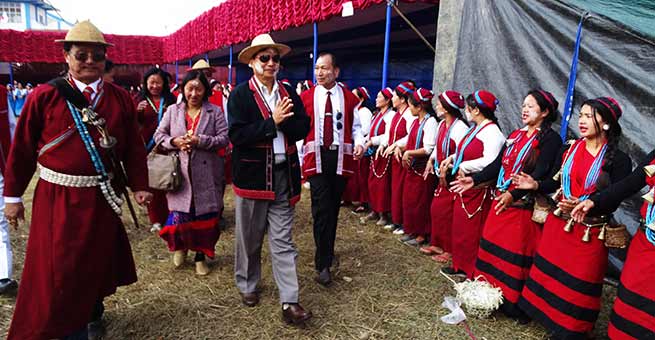 “One must protect and preserve their own traditional and culture and every parents must impart a knowledge about the same to their respective children which would help younger generation,” said Taga

While releasing the ‘Ngunge Upper Subansiri’ album (song) Taga said, ‘Ours is a distinct state with several tribes and communities residing side by side for ages and maintaining their own unique indigenous culture and traditions,” adding cultural mosaic has to be maintained, preserved and protect at all costs.

Addressing the gathers at  festival ground guest of honour Capital Complex Deputy Commissioner (DC) IAS, Prince Dhawan exhorted youths of Tagin community in particular and state as a whole to defy the bandh culture which is illegal and create hue and cry amongst the peace loving people of the state.

“To include our capital complex in a top 56 list within the country, we have to change our mindset where people’s cooperation is equally important,”

Special guest Delhi University Student’s Union (DUSU) president Rockey Tusseed while expressing his gratitude over the Tagin community for inviting him on the occasion, said there are about 700 students pursuing their study in Delhi University from Arunachal and they are peace loving students.

“I am in capacity of DUSU president assured my full cooperation and support to the students of Arunachal Pradesh,”

Several rituals were performed, several cultural teams from capital performed their traditional dances and mega dance which mesmerised the invitees and guest having huge gathering.

Yamang Taga wife of Minister Tamiyo Taga assured to help the committee in installing a power transformer in the celebration ground.