The state of Arunachal Pradesh which have been ruled several successive government for years together but still waiting for a outdoor stadium inspite of advocating the promotion of infrastructure for the sports department.

Sports Director Tadar Appa informed that all project are in progress and soon we will have four outdoor stadium in state and we would be able to conduct regional and national label games.

However the project at Pasighat was delayed due to controversy with Civil Aviation authority.

We are also going to have more outdoor stadium in state at Aalo, Tezu and Chimpu and the process would start soon Appa added.

The outdoor Stadium at Yupia amounting to Rupees 59.48 crore with sitting capacity of 15000 person at a time with facility of running track of 400 and 100 metres, football ground, pole bolt long and triple jump, short put, discus throw and hammer, jabling and high jump.

At Pasighat amounting to Rupees  40.90 Crore for sitting capacity of 11 thousand people with all other facility which Yupia have.

But in case of Ziro and Daporijo which is being constructed at an estimated construction of 24.31 and 12.41 Crore with a sitting capacity of 4000 person for Ziro and 2000 in of Daporijo and provision of  football ground only. 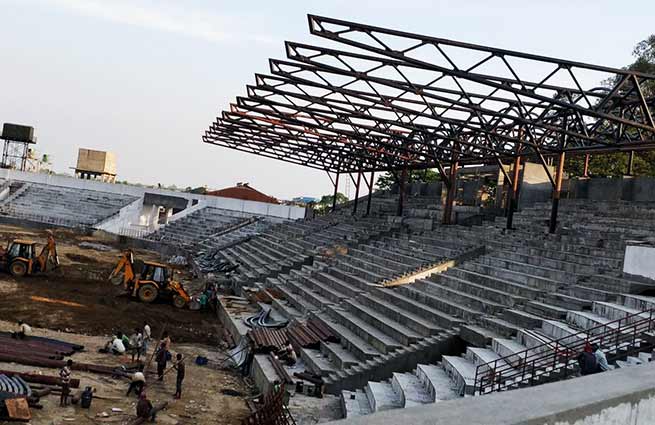 The completing target for Ziro was March 18.  But hopeful it would be completed by May while of the outdoor stadium at Daporijo is in same condition and is nearing completion.

When ask about the outdoor stadium at Pasighat, Darang said that the work started in January 16 and target is January 19 but due to objection raised by the Civil Aviation and Advance landing ground there it was delayed for around six month. Even though by maintaining the target we will completed before the target date of Jan 19.

In case of Yupia Darang informed that completion target was April 18 but it is running late and hope that the outdoor stadium comes up before 2019 with all facilities.

When asked as why the Outdoor stadium at Yupia and pasighat was delayed as the project was approved and sanctioned in 2012 under Special Plan Allocation and later on by state plan, Jt Director Darang reply that the department of Urban Development call tender and there was only a single bidder in first instance and even in second instance. Then the department conducted tender process in third time there bidders participated and the later the work was awarded to M/S Tamchi Kuhuk Construction Company for Yupia, M/S Kakum Enterprises for Pasighat and there have been never discrimination in regards for the release of fund by the state government from time to time rather state government is pursuing to complete the work at the earliest.

All outdoor stadium construction is being inspected by the former Chief Minister Nabam Tuki, present chief Minister Pema Khandu, Urban Development Nabam Rebia and local MLA of the concerned area and the district administration also carried out inspection and the work is being monitored by the officers of the Urban development is also there who is supervising the work progress.