The festival which is one of the beigest festival of the Nyishi tribe of state which imbibe the people to enjoy the festivity season for a bumper harvest and perform rituals for a prosperity and wellbeing of the community and area. The Arunachal which have great diversity of the culture and traditional value of the Nyishi community which is one of the biggest tribe of state.

The sporting events actually started from February 17 but the major sporting activities were kicks off today. Today the Volleyball tournament was kick off which shall be followed by other traditional games till the main celebration on February 26 the last day of the Nyokum Yullo festival in state will be  concluded.

Addressing the function Waghe said our tradition is our culture and thanks the predecessor for carrying forward the traditional and cultural value of the tribal community of state and appeal the younger generation to follow the footprint of forefather. 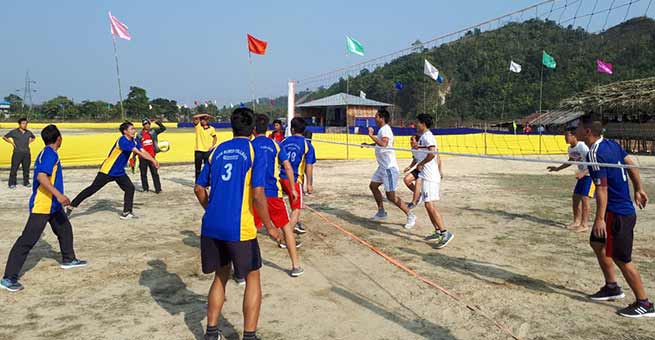 Games and sport are part of fitness apart from winning and bringing laurel and name and fame for the state and country and appeal the players to maintain team spirit with oneness and brotherhood.

Jullang Nyokum festival celebration committee-2018 Chairman Tarh Tarak while informed that there are fifteen team in volleyball and all are from rural areas of the capital complex and this the first time that all rural villages have been untiedly celebrating the Nyokum at a place and is an opportunity to be united at a place through celebration of festival at Jullang.

He emphasis the younger generation to celebrate the festival without mixing it with religion and appeal for preservation of our cultural heritage of the tribal community of state.

Among other Don Bosco College principal Father Jose Jeorge, Social Worker Taro Tagia among other were present on the occasion

Two matches were played on first day the first match mens was played between Don Bosco Vrs Dami Hapa  which was won by Dami Happa while in Women category Chimpur Vrs Hokka which was won by chimpu.

Arunachal: Public rally and Protest against Rape of a minor case in Yinkiong