Chief Minister Pema Khandu’s assurance to enhance grant-in aid to APP welfare Society from Rs 50 to Rs.100 per personnel per year and one time Grant-in-aid of Rs. 70,00,000/- for opening of the Subsidiary Canteen at various locations marked the celebration of 44th Arunachal Pradesh Police Raising Day today at Police Training Centre Banderdewa. 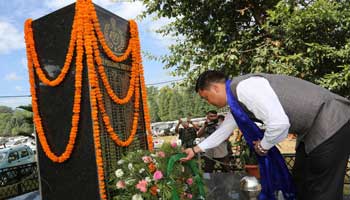 In his address to the smartly turned out contingents of Arunachal Pradesh police, Khandu said as peace is the barometer to gauge the social maturity of any nation or state, a peaceful State is one of the most important criteria for uninterrupted development. He announced that strengthening of police department would be one of the top most priorities of his government.

On the occasion, Khandu remembered the brave, honest and upright state police personnel who sacrificed their lives in pursuit of maintaining peace and fighting crime. While recalling Dy SP Late Bomto Kamdak’s supreme sacrifice, CM informed that state government has framed a policy to recognise the selfless sacrifices made by the brave police personnel in line of their duties. Under the policy an ex-gratia to the tune of Rs. 50 lakhs for all the police personnel irrespective of ranks who sacrifice his or her life while fighting any terrorist, criminals or underground elements shall be given to the next kith kin and a suitable government job for next kith and kins of the martyr. Khandu revealed that the state government has decided to give Dy SP rank job to Late Kamdak’s wife as mark of respect to the brave soul.

CM also gave a brief on institution of the State’s highest award namely Arunachal Ratna which carries a cash amount of Rs. 1 lakh along with Gold Medal and a roll of honour. Late Bomto Kamdak was the first recipient of the award posthumously.

While talking about welfare measures initiated by the state government for police department and its personnel, CM said that all women police station will be established in all the district headquarters with 401 posts while 2400 posts of police personnel would be shortly filled. Khandu said that the ration money and uniform allowances of police personnel is being enhanced and shall be directly credited to their accounts.

In order to control crime and instill a sense of security in the twin capital city of Itanagar and Naharlagun, city surveillance system would be put in place, informed CM. He further revealed that the state government has proposed for a state of the art Police Training Academy in line of NEPA, Shillong to Union Ministry of Home Affairs and pinned high hopes that it would be positively considered. CM also pitched to upgrade the existing forensic science laboratory as proposed by the department.

Khandu shared that he was aware of the problems faced by the department and assured that their grievances would be looked into in phase wise manner.

He later inaugurated the exhibition stalls put by the police department.

Speaking as Guest of Honour, Home Minister Kumar Waii revealed that he has done extensive research on Police department and is aware of what problems they have been facing. He assured all out support to strengthen police department besides keeping in mind the welfare measures of its personnel. “I am always with you all” Waii empatically said and suggested that such police raising day event should be organised in larger public gathering so that people could see the beauty and strength of the discipline force of the state.

Earlier, DGP in his welcome address gave a brief history about Arunachal Pradesh Police. He said APP had a humble beginning with handful of police officers brought on deputation in the year 1972 and now has expanded to four ranges with 20 districts police and more than 11000 police personnel.

On the day, President’s Police medal for meritorious services of police officers and personnel and Home Minister’s medal were given away by CM. Winners and runners up of CM’s Running Trophy (Football), Home Minister’s running trophy (Volley ball) and Director General of Police’s Running trophy for Marching Contingents were also given away by the Chief Guest, Guest of honour and DGP. CM enhanced the cash prizes of the football, volleyball and march past running trophies.

Smart march past display, band display by VKV students, PT display by women contingents of APP, Commando drills, SDRF and Fire Fighters display were other major highlights of the day.