The fifth edition of Nyishi Idol grand finale held at Nyikum Nia ground at Nirjuli.  Speaking as chief guest on the occasion Chief minister Pema Khandu said that the  preservation of indigenous languages and tradition expressing concern that with onset of modernity, most of the tribal communities are gradually forgetting their indigenous cultures. 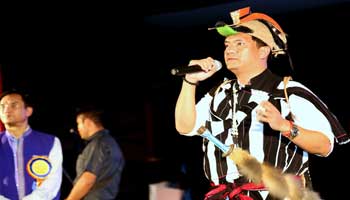 Chief Minister also observed that many educated youths who are today out of sync with their local cultures are finding it difficult to adjust in their society.

“No matter what we become in our life, we have to go back to where we belong. Once we retire, and we become old, we will find solace only amongst our own,” he said. The Chief Minister appreciated leaders of Nyishi Art & Culture Welfare Society (NACWS) for conceptualizing the Nyishi Idol. “This is a great platform for talented Nyishi youths to explore and expose their talent in singing. From here you can go on to become professional singers,” he said.

Khandu expressed that he takes personal interest in cultural songs and dances and have been organizing one such cultural competition event in Tawang. He expressed hope that similarly other communities will also come up with such platforms to give the youths a solid platform.

Announcing the winner of the Nyishi idol, Chief Minister gave away prize to Mr Tatung Tachang, who won the title beating other four contestants in the grand finale.

The prizes for first runner up and second runner up went to Ram Tagang and Bamang Ama respectively, which was given away by Nyishi Elite Society President Bengia Tolum.