Speaking media person, ADM Talo Potom said “this is a important road, which is connecting state capital with many districts of state And also some important institution like North East Regional Institute of Science & Technology (NERIST) Nirjuli with Rajiv Gandhi University (RGU) Doimukh. But due to water logging on the road from last few months its creating problems to commuter who are facing lots of difficulties while passing this place”. Potom said.

“During inspection we found that few private building was constructed on the natural Nallah by blocking the flow of rain water. Whereas the area is property of highway department which I have to verify through official document on Monday in my office at Itanagar wherein all the allotted person/building owner and official of NHIDCL have been asked to present”. Potom said.

I will take action, but  first verify the document.  However I have requested them to clear the blockage and drainage system within a day. Potom added.

NHIDCL, Executive director, Sunil Kumar, informed that “NHIDCL has constructed around 17 Km from Nirjuli to Harmoti Assam but this around 300 meter of road due to blockage of drainages the water logging was happened on road and we try to clear but failed because area is private property. We working from last two month to solve this water logging problem and now administration is cooperating and we will be solve the problem shortly”. 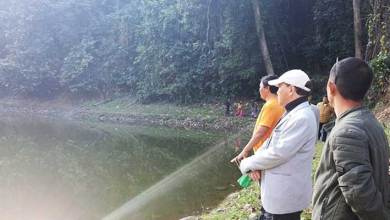 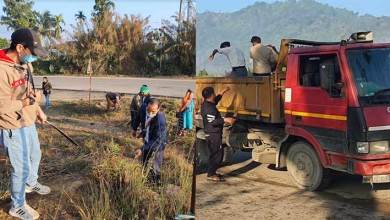