Bomdila : One person has died in a Arunachal Pradesh State Transport Services (APST) accident near Tenzing gaon in West Kameng district.  The bus  having registration No- ARX-0413 bound to Bomdila coming from Tezpur (Assam). Said an official.

Kalaktang Police station OC, Tashi Norbu Namsa inform that the APST bus was coming from Tezpur (Assam) and going to Bomdila. The accident takes place on Sunday at around 3 PM near Camp No-4 of Tenzing gaon under Kalaktang police station. The accident site is around 74 KM from Balemu check gate. He said.

There was three person on board on the ill fated APST bus which include Driver, handyman and a single passenger who was also on the way to Bomdila.

All three received injury who were evacuated to CHC Kalaktang for getting immediate treatment. During the treatment at midnight the said lone passenger succumbed to his injury. OC said. 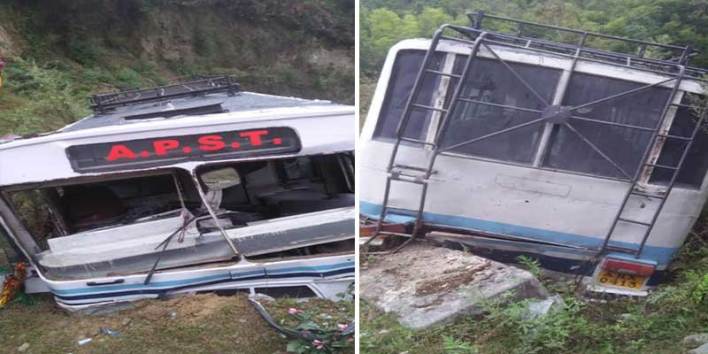 The deceased was identified as AK Dahiram, who is reportedly working as painter (Pvt services) at Bomdila. After conducting all legal formalities the body was handed over to his elder brother. However the Kalaktang police had made all necessary arrangement for the last rite which held today late evening. OC said.

The matter is being supervised under supervision of SDPO Kalatang, Jambey Netan.  A case was registered at Kalaktang PS u/s- 279, 337, 338 IPC but after the death of one passenger few section may be included. OC said.

Both the driver and handymen who also received injury were referred to Tezpur for further treatment. OC added.

I have written a letter to the Motor vehicle inspector, Bomdila for inspection of the vehicle at the place of occurrence as the reason of the accident is yet to be known. OC further said.